Every now and then, the Army has what it calls Mandatory Fun.  Usually it’s a day when the soldiers are required to show up to work (no shamming at the house) but usually in a PT uniform and instead of doing their normal training or job, they get to play sports.  It’s Mandatory.  And it’s Fun.   Kind of like our day today here at the pond!

And…Did I mention it’s Giveaway Day???  The prize that will go to one lucky randomly picked commenter is a lovely “Out of this World” Lush gift box!  You’ll for sure want a shot at receiving this Space Girl Bath Bomb and Rock Star Soap duo in the mail!  Must live in the US and be prepared to share your physical address with me-but I promise not to swim up to your doorstep uninvited 😉

So are you ready to have a little flipper fun?  Okay, me too.  Here we go.  Today we are creating our own personal merpeople- mermaid, merman, it’s up to you but it’s Mandatory!  All you have to do is leave a comment with 1) a name for your mer-being of choice and 2) some little tidbit describing him or her!  It can be just one word or a slew of them!  That’s it.  Mandatory.  Mermaid.  Fun.  You have until midnight Sunday, January 15th, to leave your comment and I’ll announce the winner here in the comments on Monday, January 16th.

I’ll get things started…I recently spent some quality time with Triton at the Court of Neptune fountain and what can I say?  The conch-wielding magnificent man of the sea inspired me here today.  He had been busy blowing into his shell, making the most awful trumpeting sound, but something about the frizzling noise worked to calm my nerves.  Traffic had been 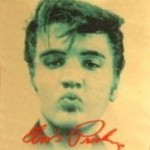 hellacious getting into DC that day.  Seeing he had a thing for music, I asked if he could take only one record back to sea with him, what would it be?  Wouldn’t you know dear Triton has a soft spot for Elvis Presley’s Hawaiian Wedding Song?  Yes, touching.  I thought so too.  He spied a worn paperback of Seize the Night tucked protectively in my bag and inquired about it.  Shyly, I told him of my secret obsession with vampire hunting Roman bad boys, one in particular as it were.  (Mighty Poseidon bless Sherrilyn Kenyon)  The mention of this very Roman surname gave good Triton’s handsome face a sour pickle kind of scrunch but he seemed to get over it soon enough.  Alas, our noontime popular culture exchange came to an end.  But not before he let me know he was heavily upset that his fountain sat dry as a bone and had been for a few days too long.  I told him I’d look into it and he insisted I snap a picture for evidence.  He wished me well and bid me adieu in the traditional fishy kiss way.  As I slowly walked away from the fountain, a heartbreakingly beautiful merman swam into my mind, drowning out all other thoughts.  His valiant name, Elvis Mermagnus.  His hair, shiny and black.  His hands, soft as the inner petal of a rose.  His fins?  So brilliant I’d bet my last breath the color turquoise hadn’t existed until he’d been birthed. 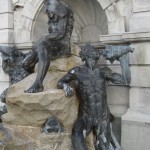