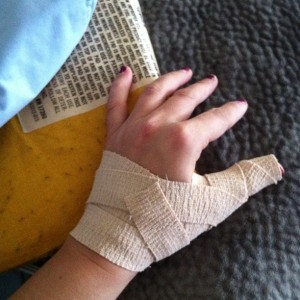 [Caveat: I am currently typing this post with my left thumb in a splint. Please excuse all the typos I’m sure I’ll find in the morning. –AK]

I am often asked what an average day in my writing life is like.

I have a rough outline of what my *ideal* day is like, in a world where conventions don’t exist, everyone is healthy and paid in a timely fashion, nothing is on television, the world is at peace, and the average temperature is 72 degrees Fahrenheit with a breeze. I have maybe a month of those days spread out throughout the year. And that’s a good year.

The rest of the year, my life is a bit insane. Yes, EVERYONE’S life is a bit insane. But there are times when my days reach Bridget Jones proportions. For instance, here’s an unedited example of an “average” day when Magical Words asked me to chronicle my life as a buyer for a major book wholesaler a bunch of years ago.

A better–and more recent–example is my experience at Dragon Con 2013 this past Labor Day weekend.

I had an AMAZING time, made some fantastic new friends, and met up with wonderful folks that I hadn’t seen in far too long. As I was slated to emcee the Adam Ezra Group‘s performance at Sherrilyn Kenyon’s Styxx Launch (and five-hour-long signing) Thursday night, I hit the ground running on Day Zero (Dragon Con doesn’t officially start until Friday…for now). 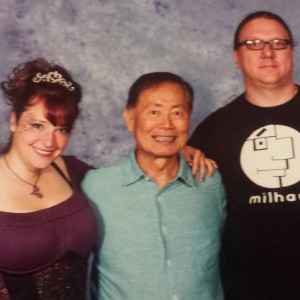 From then on it was a whirlwind…I pulled my bootstraps, saddled up, and took the twister for a ride. Friday was the very successful, fully-costumed Princess Alethea’s Traveling Sideshow, featuring authors Leanna Renee Hieber, Mari Mancusi, Diana Peterfreund, Delilah S. Dawson, and musical guest star/author Gray Rinehart. Saturday was the parade–I ran and gave hugs to a few people screaming my name from the crowd lining the streets. Sunday was our photo op with George Takei (yay!) and my simultaneous autographing with Sherrilyn Kenyon — I showed up a little early and sold out all of the book I’d brought before my scheduled time, so I sent the Fairy Godboyfriend back to our bookseller booth for more.

I was on fire. On cloud nine. On top of the world. A freaking Rock Star. Possibly the Best Dragon Con Ever. It was such a great weekend that I even dressed up on the last day–Monday–the day no one hardly ever dresses up for because it’s “Break Booths Down & Drive Home” day. I was scheduled to appear on a panel with Jim Butcher at 1:00pm. The bookstore booth would be open until five, and I was bound and determined to use my magical charm to sell every last title on my shelf.

I left the Fairy Godboyfriend to take the bags down to the valet and was headed through the Westin to the America’s Mart around 10:45am. I smiled at everyone as I passed…I was Michael J. Fox in The Secret of My Success, and I was walking on sunshine. I smiled at a guy who looked at me in the last hall to the Mart…

…and then slipped and fell in the hugest puddle of vomit you’ve ever seen.

I looked back up at the guy. “Is this what I think it is?”

“I told you not to step in it,” he said condescendingly.

“Obviously, I didn’t hear you.”

In hindsight, I should have stood up and immediately punched the mess out of that jerkface. I’m really hoping the Fairies of the Universe take care of that for me. Where no one in the hotel had yet to make so much as a move, the moment I fell, my Dragon Con family (because no one is a stranger to me at Dragon Con) came to my rescue. One man pulled a tablecloth off a nearby cafe table for me to use as a makeshift towel. People began to move stanchions around the mess. A Dragon Con staff member named Chris stopped to talk to me and keep me calm while I waited for the hotel staff. He’d just had his iPad stolen the previous night…and if I had the money, I’d buy him another one for keeping me fairly sane in that moment.

Most immediately, there was the mental trauma of being covered in someone else’s biohazard. There was also my knee, which was already hurting like a b*tch. And there was the panel with Jana Oliver, Leanna Hieber, Ted Naifeh and JIM BUTCHER still happening in two hours.

Finally a Westin staff member brought me a couple of towels, and then TOOK ONE BACK to give it to one of the women now complaining that she was being forced to mop up Loch Ness. On my way to the restroom, fellow booth author John Hartness saw my distress and asked if there was anything he could do.

“Yeah. Give me the shirt off your back.” John did not deserve the sarcasm I piled on those words.

“I do have another shirt in my backpack, actually,” he said without missing a beat. “Here.” And like magic, my Knight in Shining Armor produced a beautiful blue men’s dress shirt.

In the bathroom, I stripped down to my skivvies and washed myself in the sinks with liberal amounts of soap. I think I spoke to more people while in my underwear than I had walked by that entire morning. Not exactly the experience I planned to have this year at Dragon Con! (yes, we’re all family…) 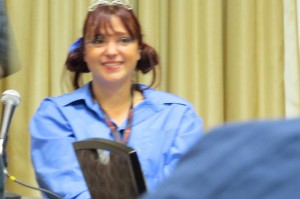 But you know what? It was still an amazing day. The Fairy Godboyfriend pulled the car back out of valet for me and delivered a pair of shorts to my bathroom. Westin Security got me ice packs for my knee, and a First Aid Specialist in the front row of the Jim Butcher panel helped me figure out how to make the packs function. (Jim even laughed at my jokes and took our Old Skool Fae gang sign for a test drive!) I filed a report (as John suggested), because, when you fall, things like broken thumbs sometimes don’t hurt until the next day (BOY HOWDY), and though the Westin is now not returning my calls or offering to pay for the X-rays I’ve had for my thumb, I have to say…I made some GOURMET lemonade out of those freaking lemons.

I also got great material for one of the most fun and disgusting posts we’ve ever had on the Mermaids, and future Dragon Con panels for years to come. You’re welcome. *wink*

23 thoughts on “With One Hand Tied Behind My Back”