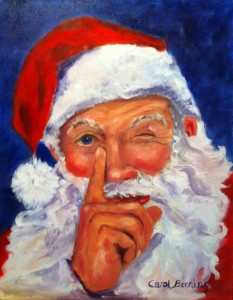 Yes, it’s that time of the month again here in the Mermaid lagoon: Guy Day!

I would like to welcome an incredibly unique and special guest to our site today. I caught him during the off-season and used all my magical princess mermaid powers to persuade him to answer a few questions for this special day.

Please sit back, relax, and enjoy your milk and cookies while you read this EXCLUSIVE interview with the one…the only…SANTA CLAUS.

Alethea Mermaid: Santa, thank you so much for joining us today!

Santa: Ho ho ho! Anything for you, Princess. I’m a big fan of the Mermaids.

Alethea Mermaid: And we’re big fans of yours! So…let’s get down to business. First off: Be honest. After hundreds of years of delivering gifts on Christmas Eve all around the globe, aren’t you exhausted?

Santa: (chuckles): Of course! Exhausted, but never tired. It’s kind of like…well…like going on book tour. You coop yourself up in your house for months working like crazy. Then, for a short period of time, you get to dress up and go out into the world to enjoy the fruits of your labor and time with your fans. For an introvert like me, that’s exhausting work, but I would never stop doing it. How could anyone get tired of making little children happy?

Alethea Mermaid: Thank you, Santa! That makes perfect sense, actually. I’m still recovering from my own book tour this summer.

Santa: (pats Alethea on the head) Go slowly, my dear. You’ll get the hang of it. After hundreds of years, you’ll be an old pro, just like me.

Alethea Mermaid: But you also have a lovely wife to come home to that takes good care of you. Tell me, how did you meet?

Santa: We met on my travels, during one of my many sleigh rides, once upon a time ago. She was the best present Christmas present I ever received.

Alethea Mermaid: Does she like living at the North Pole?

Santa: Oh, we keep each other warm at night. (winks)

Alethea Mermaid: You’re a very lucky man. Many people are not so lucky. What do you recommend for lonely people around the holidays?

Santa: It’s hard to believe that on a planet full of so many people there could still be loneliness, but it does still creep up, especially around the holidays. I always recommend doing something nice for someone else: a friend, a family member, even a stranger. It is imperative that we put ourselves out into the world and work to make it a better place…even if it’s just this one time of the year. Every little bit helps.

Alethea Mermaid: I hate to bring this up, but there are some people out there who don’t believe in you.

Santa: (whispers) Some people don’t believe in mermaids either.

Alethea Mermaid: I know! Shocking. What would you say to these people?

Santa: Every man, woman, and child is entitled to their own belief. To the doubters I would say: You don’t have to believe in me–but you better believe in yourself!

Alethea Mermaid: Good answer! Now I have a few questions from some fans, if you don’t mind.

Santa: I’ve had many Reindeer over the years help me pull my sleigh. They take turns–don’t want to wear themselves out, you know! There are the ones you’re most familiar with: Dasher, Dancer, Prancer, Vixen, Comet, Cupid, Donner, Blitzen, and Rudolph, of course. But there’s also Flossie, Glossie, Racer, Pacer, Fearless, Peerless, Ready, Steady, Feckless, and Speckless.

Alethea Mermaid: Staci asks: What is the threshold for when a person gets put onto the naughty list?

Santa: That threshold is different for every single person. The List doesn’t just take into account December, you know. It tallies up everything you do, every day of your life. The List is very magical and very busy and has a mind of its own. Even I don’t argue with The List. At the end of the day, I’m just a toymaker.

Alethea Mermaid: Ian asks: Which is your favourite Santa movie?

Santa: Hmm…it’s a toss up between The Life and Adventures of Santa Claus and Miracle on 34th Street. The Natalie Wood one.

Alethea Mermaid: Janet says: Dear Santa, I love the long letters you leave us almost as much as the presents. Your handwriting looks surprisingly like my dad’s. Are you an engineer too?

Alethea Mermaid: And our last question comes from Courtney, who writes only, “What were you and mommy doing?” I hope you know what this refers to.

Santa: Ah, yes. Do please let Courtney know that I’ll be sure to tell him. When he’s older.

Alethea Mermaid: And that’s all the time we have…thank you again, Santa for joining us here in the Waterworld Mermaid Lagoon!

Alethea Mermaid: Santa? Are you all right?

Santa: We haven’t answered the most important question of all.

Santa: That’s right! The most important question is: What do YOU want for Christmas?

Go on, folks, you can tell Santa. If you could have anything for Christmas, what would it be? 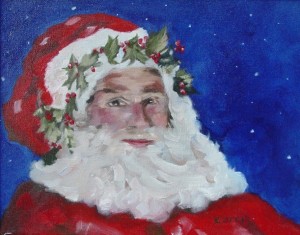 Many thanks to Carol Berning for the use of her gorgeous artwork. To see more of Carol’s work, just click on the pictures or visit www.carolberning.com