[Due to illness, the part of Kerri Mermaid will be played today by Alethea Mermaid. ]

As some of you may know, I have a side job that I love…but one I can’t really talk about.

It’s not a “day job” — writing is my day job now, and I don’t make enough from this side job to do much more than pay my AT&T bill every month.

Lots of writers in the DC area have jobs they can’t talk about, so it’s a pretty common theme around here. Most of those jobs involve a security clearance. Mine involves lots of shots and First Aid training.

I am a substitute for the Loudoun County Youth After School program (YAS). It’s only three hours a day, on school days, and only when I get called in. I cover regular leader and supervisor positions in nine schools.

And that’s pretty much all I can tell you. Because when one works with minors, one is sworn to secrecy about their actions,  conversations, and identities.

I am not, however, sworn to secrecy about my own efforts that come about as a result of the YAS program. For instance, let’s take this masterpiece right here: 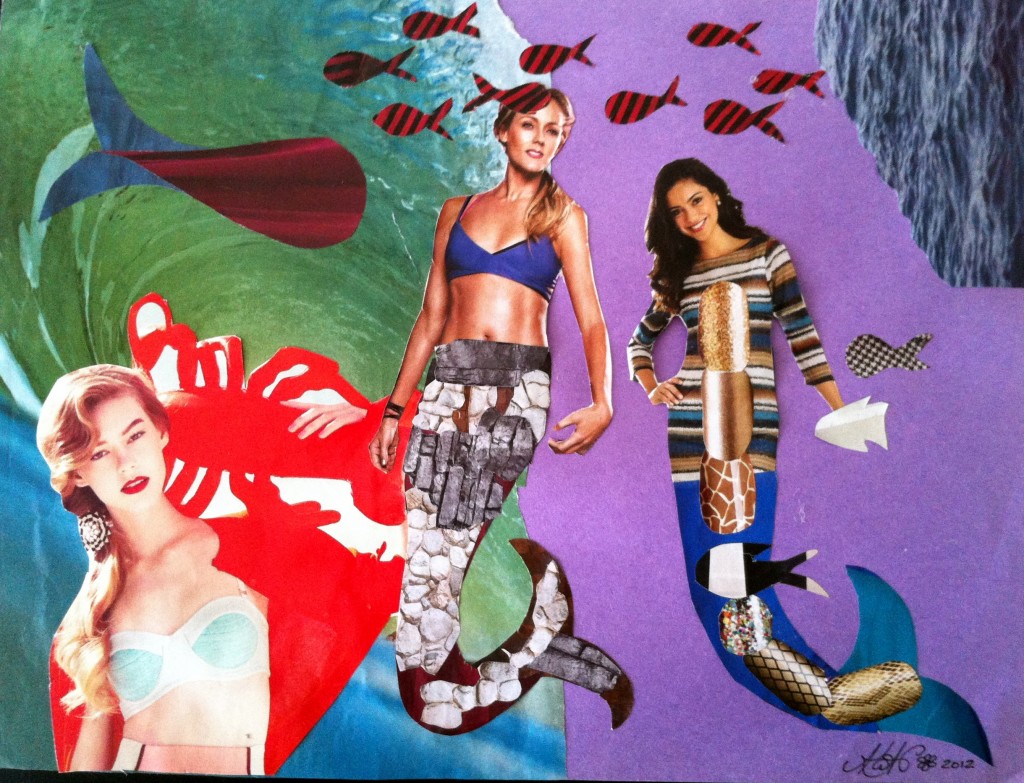 Earlier this year, Neil Gaiman told the world to Make Good Art. It’s hard to believe one is Making Good Art when one is Stuck in Revision Hell. I have been itching to make art for some time, and when presented with the opportunity last week, I jumped on it.

What do you think? I mean, seriously? HOW FABULOUS IS THIS??

The first mermaid was the one with the sweater. I know…not the best selection for a mermaid torso, but fish are cold-blooded! Why wouldn’t a mermaid wear a sweater if she wanted to?

The second mermaid was the middle blonde in the bikini. Her tail was a bit too much like curtains, so I patched on some stones and bricks I found in a skateboarding magazine. I like the way it came out.

The third mermaid was the one in the foreground because SHE HAS A LOBSTER. ‘Nuff said.

So…your own thoughts and critiques? I’m interested to hear them.

And remember, THIS IS A FABULOUS WORK OF ART, so please compliment accordingly. *grin* xox