Being a mermaid, I’m a Navy girl – of course. But if I had to pick a second favorite branch of the U.S. military it would be the Marine Corps. Especially if they all look like the movie Jarhead. Mmmmmm. Sorry, what? I got lost in my happy place there for a second. 🙂

While I don’t have any Hollywood Marines (really who needs ’em), I have something even better. Five mystery Marines giving their answers to my guy think questions. Take it away fellas!

Scenario: Two Marines are at a bar.  One has just been dumped. His buddy is there for him, drinking as well, but trying to stay slightly more sober for when they need to leave.  What would the buddy possibly say to his friend who just got dumped? 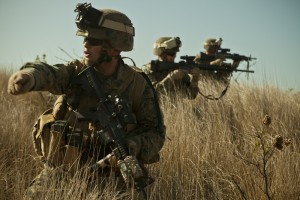 Marine 1 – Hey man, there’s tons of women out there.

Marine 3 – It’s just a girlfriend, there’s many fish in the sea.

Marine 4 – What a bitch, she doesn’t deserve you. Let me buy you a drink.

Marine 5 – Let’s get fucking drunk. I think that chick is checking you out.

What would a Marine say when he sees his ex walk in with someone new?

Marine 1 – I would remain silent.

Marine 2 – I would talk to the guy and act like I didn’t know her.

Marine 3 – I wouldn’t say anything.

Marine 4 – I wouldn’t say anything.

Marine 5 – Hey dude, next time you kiss her and it tastes like freedom, you’re welcome.

Food, sex, sports: You can only have one. Which do you pick?

What would a Marine say if his buddy is being a jerk to his girlfriend?

Marine 1 – Fucking knock it off man. You’re being a dumbass.

Marine 2 – Chill the fuck out.

Marine 5 – You never take your turds out of a toilet and keep them, so why would she treat you any different.

Which is hotter, the uniform or the Marine inside?

***
A huge Waterworld Mermaid thank you goes out to my favorite Marine who made this interview happen. I’d give you a hug, but I know your wife and she could kick my tail fin from one end of the lagoon to the other – plus she loans me dresses. 🙂
The fun continues on my blog with more Q&A with our mystery Marines and five-book giveaway. Stop by and  find out how they keep the romance alive when they’re gone so much.