Guess who’s back in the Lagoon today? That’s right, it’s our very own Avery Flynn. Yay! *Throws Glitter!* (Man, I’ve missed throwing glitter at Avery!) Anyhoo, Avery has a new book out and she stopped by to share an excerpt and get everyone entered in a $500 – that’s what I said, $500 – giveaway.

I won’t take up any more time. Welcome back, Avery Flynn….

Hola Waterworld Mermaids! The lagoon is looking awesome, I don’t mind if I do dip a toe back in. 😉

Thanks so much for letting me swim with you and share an excerpt from my latest, This Year’s Black. It’s the second in my Killer Style series, but don’t worry it can be read as a stand alone. It’s about a private investigator who only wears black, Allegra “Ryder” Falcon, and her client, Devin Harris – an ex-MMA fighter turned fashion guru who just happened to have an amazing one night stand with Ryder before she blew him off. Now they have to work together to find an embezzler. 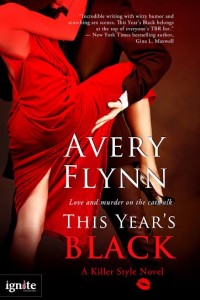 If she hadn’t run a background check on Devin, Ryder would have sworn he’d grown up, like her, in the working class neighborhoods of Waterberg, far from the ritzy urban enclaves of Harbor City. Talk about being dead wrong. Even if she had a hundred dollars for every pasta noodle she’d eaten in her life, she wouldn’t put a dent in his trust fund.

Devin cleared his throat, never pausing his pounding on the keyboard or bothering to look her way. “You’re staring.”

Yeah, so damn hard her eyeballs were about to fall out. Blinking rapidly, she straightened in the bucket seat and picked an invisible piece of lint from her black chiffon tank top while running through a mental list of shitty ex-boyfriends to remind herself of why she needed to stop ogling her client. No matter how hot he was.

“I was wondering how a white-bread, private-school-attending, eating-Sunday-brunch-at-the-club dude like you ended up with a healthy start to a tattoo bodysuit.” There. That should put him on the defensive.

His fingers paused on the keyboard. “Ten years as a carny.” The clickity clack revved back up to full speed.

Score one for the rich kid. “Tilt-a-Whirl?”

The clacking ceased. He leaned back in his seat and arched his neck from side to side in a move natural to every jock she’d ever dated. Next, he rolled his shoulders under the perfectly-tailored shirt and leveled a heated gaze at her. Appraising and full of dark promise, the look made her clothes too tight to contain her suddenly aching boobs, and her lungs too small to hold the proper amount of oxygen.

“Kissing booth.” He turned his attention back to his laptop.

Years ago, Ryder’s mother had warned her never to poke a bear with a stick. While she’d always remembered her mother’s advice, she hadn’t taken it then and she wasn’t going to now.

Ryder tsk-tsked. “Funny, I figured you for a big draw at the dunk tank.”

A shiver of anticipation danced down her spine. Picking a fight with a client might not be the smartest move, but it was so much better than sprinting across the aisle and jumping his bones at five thousand feet. The butterflies in her stomach disagreed, but what did they know about anything?

Oh yes, there is trouble ahead for Ryder and Devin! 🙂 Now I’m going to swim on over to that cute mer-bartender but before you join me be sure to enter the This Year’s Black $500 Escape giveaway! (See below.)

This Year’s Black by Avery Flynn

A fighter since birth, Allegra “Ryder” Falcon would rather trade in her all-black wardrobe for head-to-toe hot pink than let anyone ever see the cracks in her tough exterior. But one night with a stranger changes everything.

Devin Harris may have given up his MMA fighting dreams for high fashion, but that doesn’t mean he isn’t always in control. So when someone embezzles millions under his watch, he isn’t going to let the private investigator working the case go it alone–even if she is the woman who blew him away in bed and then blew him off.

Just when it seems like it couldn’t get any hotter between Ryder and Devin, the case takes them to a tropical paradise where the danger increases. From the catwalk to the pineapple fields, they have to work together to track down the missing millions before the thief finds–and kills–them.