I may or may not have shivved a couple of crabs to elbow my way back in here for the release of Kerri Carpenter’s Flirting with the Competition, but there’s not a court in the world that would convict me. After all, you know I’m not missing any of this awesomeness. How could I? Flirting with the Competition is a fab quick read involving hot lawyers, stuck elevators and Jordan. Oh, you don’t know Jordan? Hold on, here’s Jordan: 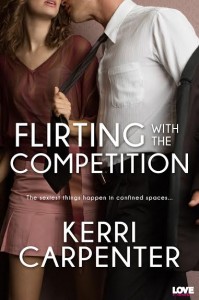 Flirting with the Competition

Roll your tongues back up, ladies (and gents). 🙂

I cornered Mermaid Kerri so I could ask her about Flirting with the Competition (out today – go get it!).

OK, I totally teared up and had a few sniffles when I saw the dedication for Flirting With the Competition. You have to share who Nunnie was and why she was right (and she totally was).

Nunnie is my maternal grandmother. When I was about seven or so, I sat at her kitchen counter and wrote a poem. From what I remember, it rhymed and was generally cute. But Nunnie took one look at it and declared that I was a writer. She told everyone in my family that I was a writer and she never stopped believing it – up until the day she passed away at 97 years old. Because she believed with unwavering conviction, so did I.

Now that we’re all reaching for the Kleenex, let’s bring this back to happy land. I want to hear about where the idea for this story started.

*sniffle sniffle* Okay, moving on. In spring of 2013, I was listening to a webinar given by former lovely and talented Mermaid, Robin Covington, who was talking about writing sexy time in novels. (I don’t think that was the actual title.) She said something about utilizing objects in the environment and I thought, what if you don’t have any objects? What if you’re stuck in an elevator? Then I wanted to know who was stuck in an elevator and where they were trying to go. I started writing Flirting with the Competition the next morning. So thanks, Robin!

No, and that’s probably a really good thing because I suffer from a touch of claustrophobia. Although…if I was stuck in an elevator with someone like my hero, Jordan, I’d probably be just fine. Of course, with my luck I’d get trapped with the person who hadn’t bathed in 16 days and started whistling. (I HATE whistling!)

You live in the Washington DC area, is that why you decided to set Flirting with the Competition there? What about the story is true to life when it comes to living in DC?

Secret about Kerri – I set almost every story I write in either DC, Virginia, or Pennsylvania. I’m from PA, went to college in DC, and currently live in VA. Makes research a breeze. 😉

Setting Flirting with the Competition in DC was a no-brainer. People in DC like to work and love to talk about it. In fact, the first question you usually get when you meet someone new is, “where do you work?”

Did you know the ending before you wrote the first word or did you find your way to it?

I knew from that first night that I wanted two enemies trapped together. By the next day I had decided they would be competing for the same job. But who would get the job in the end? No clue. I’m a total pantser (For non-writers: this means I don’t plot out my stories before I start writing) so I came to the ending rather organically. And the ending you’re reading today is actually different from my original version. But I love this one so much more!

What inspired you to write Flirting with the Competition?

I’m a huge fan of reading novellas and I wanted to try my hand at writing one. At the time, I had just finished the 713th revision on a long contemporary romance I was writing and I wanted to do something fun, flirty, and SHORT!

Casting couch time. Who would you cast for Whitney and Jordan?

A lot of writers use actors as inspiration for their characters. I don’t really do that. But if I had to pick…I would go with either Molly Quinn (she plays Richard Castle’s daughter on Castle) or Rachelle Lefevre (who was in the Twilight movies) for Whitney. Jordan kind of looks like Mike Fisher (who plays hockey for the Nashville Predators and is married to Carrie Underwood). But really, any super-hot, super-alpha guy with a heart of gold underneath will do. 😉 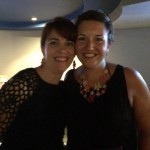 Avery and Kerri hanging out in San Antonio this past July.

Don’t leave us hanging, what’s next for you?

I have a full-length contemporary romance called, The Best Kind of Love, coming out with Soul Mate Publishing in December. (See above – those 713 revisions totally paid off.) I’m also writing another novella where two people get stuck in a confining space. Any guesses where I’m putting them this time?

Thanks Mermaid Kerri! So everyone go out and grab your copy of Flirting With the Competition! Short blurb and buy links below.

Kerri would love to give one lucky person a $10 Amazon gift card. Lots of fun stuff to buy over at Amazon – like a debut novella perhaps. 😉 To enter, all you have to do is answer the following question in the comments by midnight tonight. Winner will be announced in the comments tomorrow morning.

Question: Who would you love to be stuck with in an elevator?

Flirting With the Competition

Lawyers Whitney March and Jordan Campbell are interviewing at a prestigious law firm. For the same job. And Jordan is determined to win, despite his sexy, capable, and fiery rival. But when the elevator they’re sharing comes to an abrupt stop, they’re stuck—together.The only thing they have in common is determination to get the job…and an unexpected and escalating attraction. And it’s only a matter of time before these competitors indulge in a very sexy little connection between floors.

You can buy Flirting with the Competition here.