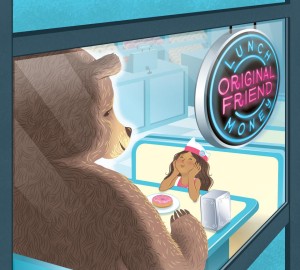 It’s June, everyone! Three weeks ’til midsummer, countdown to the end of the school year, and advent of THE SUMMER READING PROGRAM.

I love Summer Reading Programs. Always have. Even before I was a Children’s Librarian running puppet storytimes and painting faces at Carnival, I was a kid checking out 20 books every two weeks (the Richland County Public Library max at the time) and racking up the prizes.

This past weekend, my friends in the band Lunch Money held a concert to kick off the RCPL Summer Reading Program. (If you happen to have young children in your life and they don’t have these CDs, they are missing out!) J.P. texted me after the show and told me that he’d name-dropped my one of my children’s books (AlphaOops: The Day Z Went First) during the set and highlighted the fact that I was a local author. By the end of the concert, this display had magically appeared in the Children’s section:

But I have to admit…I felt a little guilty. Technically, I haven’t lived in South Carolina since 1998. My family moved there from Vermont when I was six. I learned to speak the strange language (“Y’all take y’all’s books and go to y’all’s classrooms”). I graduated from high school and college there. Heck, I had a starring role in a miniseries on SCETV. Of all the places I’ve lived, South Carolina probably has the most claim on me. But I wasn’t born there, nor do I live there now.

This got me thinking…what exactly is it that makes a “Local Author”?

I’ve moved around a lot, so let’s use me as an example.

1.) Vermont: I was born there. If you were born in a place, I think that should grandfather you in as a Local Author.

2.) South Carolina: Spent 16 years there, and graduated from college. Even if it’s no longer “home,” I still spent the largest percentage of my life in SC. 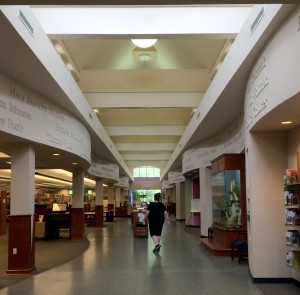 One of my goals in life is to have my name up on the Author Frieze in the library where I used to work.

3.) Tennessee: 11 years here. Remember when I said I was a Children’s Librarian? That was in Tennessee. I  spent almost a decade there working for the world’s largest book wholesaler. My first book was published while living in Tennessee.

4.) Washington DC (area): I only lived in Northern VA for 4 years, but I made an incredible amount of friends and a definite name for myself as an author in the time I was there. My first novel was published while I lived there. The Waterworld Mermaids were created. I signed at least four times at Nora Roberts’ bookstore in Boonsboro, MD. My favorite local bookstore–Turn the Page–is in Arlington. I taught at the local libraries and signed at almost all the bookstores. I belonged to the Washington Romance Writers AND the Maryland Romance Writers AND the Mid-Atlantic Chapter of SCBWI. Leaving was really, really hard.

5.) Florida: Where I live now. Like your birthplace, I figure “the state where you live now” grants you immediate Local Author status.

So what do you guys think? Is there a statue of limitations on how long an author has lived in a place or how much an author accomplishes in a place before they are considered a Local Author?

And for those authors out there: In how many states do YOU claim Local Author status?