We are flipping our fins and throwing glitter in the mermaid lagoon today! Why? It is the release date of Kissing Mr. Wrong, a novella by our very own Kerri Carpenter!!!

This novella sounds AMAZING — kinda like Kerri herself. So amazing, in fact, that I had to corner Kerri in the lagoon and ask her a few questions about her latest book.

1. What was your favorite scene to write in this book? 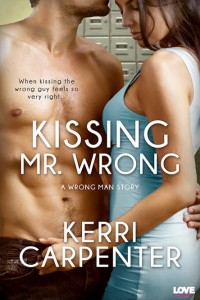 This question took me the longest to answer because I couldn’t decide! It might be the opening scene where Vanessa and John have a HUGE misunderstanding. She’s just lost her job and he thinks she’s going to throw herself off a bridge. In the end, she almost goes over the side anyway, he saves her, and they, um, having a little sexy time.

3. Before Vanessa discovers her one-night-stand is her best friend’s brother, she and her best friend have an . . . interesting conversation about her experience. Care to tell us about this conversation?
Well, we all know that girls talk. At least with their BFFs. However, it’s not until Vanessa and John discover who the other is…
“OMG – you’re my best friend’s brother!”
“OMG – you’re my sister’s best friend!”
…that a certain realization dawns for Vanessa. Yep, she tells her BFF everything including… well, um, ahem, penis details. Oops!

4. Not only is John the brother of her best friend, but he’s also two years younger than Vanessa. In Vanessa’s eyes, which is a bigger deal-breaker? What other ways is John Mr. Wrong? What ways is he Mr. Right?
Being her best friend’s brother is definitely a bigger deal breaker. In fact, she’s really just grasping at straws with the age thing and John calls her right out on it. But the fact that he doesn’t plan on staying in town definitely puts another check in the Mr. Wrong category. Yet, somehow she’s still attracted to him. Maybe because he sees how talented and beautiful she is, and when she’s with him she feels like the best version of herself.

5. Can you give us a few “Easter eggs” about this story? Inside jokes you’ve hidden that the reader may not necessarily pick up on?
I love Easter eggs and I definitely have a couple in this story!

Since I adore The Walking Dead, I named quite a few periphery characters after people on the show. Carol and Beth both make appearances.

If I’m drinking, I go for wine. But every once in a while, I’m tempted to have what I call “a big girl drink,” and my hard liquor drink of choice is a good old gin & tonic. That drink plays an important role in one of the scenes of this book.

Like many people, I must have my coffee. And I truly believe that when you move into a new house the first two things you should do before any other tasks is set up your coffee machine and get sheets on your bed for that night. That’s why a Keurig plays a prominent role in one of the scenes.

Thanks so much for answering my questions, Kerri! I am sooo looking forward to reading!

Blurb: Three months ago, graphic designer Vanessa Hewitt slept with the ridiculously hot guy she met after nearly falling to her death while stargazing on a bridge. The adrenaline-fueled night of we’ll-never-see-each-other-again sex fulfilled every fantasy, but with her best friend’s wedding on the horizon, Vanessa can’t stop thinking about what would happen if her sexy stranger passed through town again.

Haunted by his time in Afghanistan, soldier John Campbell returns to his sister’s town just long enough to help plan an engagement party for her. When he realizes her best friend is the sweet one-night stand he’s been fantasizing about for months, he’ll do anything to have her again…though getting trapped together in a storeroom wasn’t quite what he had in mind.

Vanessa is in hell. Or is it heaven? Because with every touch, their forbidden connection grows, until kissing Mr. Wrong starts feeling more like kissing Mr. Right…

Kerri Carpenter began writing in her grandmother’s kitchen at the age of seven in a small town outside of Pittsburgh, PA. After graduating from Georgetown University, and working at The Washington Post and several nonprofit organizations, she began her freelance writing career. Happy endings called to her so she turned her focus to romantic fiction. Now, Kerri writes contemporary romances, usually set in small towns. She enjoys reading, cooking, watching movies, taking Zumba classes, rooting for Pittsburgh sports teams, and anything sparkly. Kerri lives in Northern Virginia with her adorable (and mischievous) poodle mix, Harry.

You can buy the book here!