I met Delilah S. Dawson at Dragon Con. We were on a panel together — I forget how many years ago. She was the other author on the panel (besides me) wearing a fabulous costume. We did not sit next to each other. I slipped up and accidentally called her “Delia” and felt like an idiot. I don’t think I saw her again that year. But I remember thinking, That woman is really cool and I wish I knew her better.

Getting to know Delilah S. Dawson has been one of the better decisions of my life.

My love for Delilah started with her tweets of verbatim dialogue with her kids. (Delilah’s son once decided to be an evil supervillain whose goal was to shut off the sun. She asked him politely not to, because she needed it. His response: YOU HAVE A LAMP.) Then there was her blog, with its incredibly helpful entries on being an author and reader that continually make me think “Why didn’t I post that?” And then there was her fantastic entry for Dear Teen Me that broke my heart into tiny pieces and made me love her all over again.

Delilah has a new book out this month — HIT — about a futureworld teen who is forced to become an assassin in order to save her mother’s life. (It also has a seriously kickbutt cover.) I thought this was as good an excuse as any to invite Delilah into the Mermaid pond for a swim and a chat about three of the books changed her life…

Three Books That Changed My Life, by Delilah S. Dawson

I’m a Romance writer, but I grew up with no respect for Romance. In my house library, horror and science fiction ruled. We thought of anything with smooching as “bodice rippers” and assumed they were all poorly written drivel without a plot. Oh, what fools we were, and oh, how our shelves have changed. Now my mom wears a “Keep Calm and Dinna Fash, Sassenach” shirt, and I have penned three Romance books with naked man chest on the covers.

The Valley of Horses by Jean Auel
When I was 13, my mom suggested I read Clan of the Cave Bear. It was a gripping tale merging real history with the fictional account of a homo sapiens raised by neanderthals. When I found its sequel, The Valley of Horses, in the used book store, I had to buy it to see what else Ayla did. As it turns out, she tamed a horse, adopted a wolf, invented a spear thrower… and had lots and lots of athletic sex. And I couldn’t put it down, even as I knew that what I was reading was forbidden and strange. That paperback—which I still have— was my first introduction to the concept of women as sexual beings capable of receiving as much pleasure as men. No bodices were ripped, and Ayla continued to be a great fighter, a fierce friend, an intelligent inventor, a talented cook, and basically the progenitor of our species, all while having a billion orgasms.

The Mists of Avalon by Marion Zimmer Bradley
Just as The Valley of Horses was my introduction to women as sexual creatures, The Mists of Avalon was my first taste of women as figures of power. Although I recently discovered that the author was a horrible person who did horrible things (http://www.jimchines.com/2014/06/rape-abuse-and-mzb/), that doesn’t change the fact that when I felt the most powerless and awkward on the brink of puberty, this book made me feel like I could claim strength and be more than just a spectator in my life. King Arthur was actually a pawn of strong women? SOLD. It was so gratifying and reaffirming to see women recast as the heroes of history and legend.

Outlander by Diana Gabaldon
I didn’t recognize, when I was younger, that The Valley of Horses and The Mists of Avalon were actual Romances. I considered them Science Fiction or Historical Fiction. That’s right—young me had a genre chip on her shoulder, the little goof. And then a friend recommended Outlander. I took one look at the back cover and put it right back on the shelf. A bodice ripper! 900 pages of ripping bodices! And then I moved 300 miles away and had pneumonia for three months with no money to see a doctor and no TV. The used bookstore was the only thing that helped keep me sane, and when I stumbled upon a ripped-up copy of Outlander, I figured it was a good bargain for that many pages. And then, fourteen hours later, I looked up and counted down the hours until the used bookstore would open in the morning. Because I needed the sequel like I needed air. I’d never cared about characters so much, never hung on every word, whether it was dialog or instructions for making porridge.

History, violence, sex, intrigue, jokes, horses, castles, kilts—Outlander had it all. And I was finally forced to admit that Romance could be so much more. That it wasn’t silly or poorly written, that it could have plots that made you sweat and characters that clung to your heart and never let go. That’s what I want out of every book, not just Romances: I want it to stick with me. And that’s the kind of book I try to write, every time. 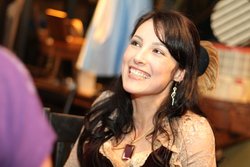 Delilah S. Dawson is the author of HIT, Servants of the Storm, the Blud series (with naked man chest!), and the upcoming Wake of Vultures. She also writes Geekrotica as Ava Lovelace.

Find her online at www.whimsydark.com.

[And if you’re up for a ton of fun, be sure to follow Delilah’s exploits  on Twitter! –AK]