Friends, I have a confession to make today.  And a story to tell.

Confession: After a summer of industrious writing almost every single day, my writing urge came to a screeching halt.  Sometime in August, I believe. Definitely about a month ago.  Maybe more. I didn’t panic, because I was sure the root cause would be discovered eventually, and we’d get our little writing choo-choo back on track.  And, with the school year started, I’m not exactly eager to strain my back getting pages out. I have Freshmen to train, and Seniors to tame, and a library to run – that is the priority now, until next May. If the writing waits, it waits. I’ll live.

At least, after the CTRWA Cherry Adair workshop last weekend, I do know more about why my story is stalled. Gang, it’s not pretty. Ms. Adair diagnosed my story as “thin”. She had ideas, and my chapter mates backed me up with suggestions for an intriguing bad guy and a twist. Once I get her plot board out of the car, I’ll clean off the dining room table and get my butt back in chair.  And that’s my confession.  Which brings me to my story, which is about a much earlier stall in my writing career. 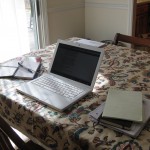 Where I write these days.

Story: A long time ago (about 1992), I hung up my keyboard and quit writing. I’d moved to New York two years before, and I was so homesick I really wanted to quit everything – family, home, marriage, kids, all of it. Sitting at the keyboard was an anxiety-riddled exercise. I was an award-winning author with a book out, and I needed to produce, but I was stressing myself out of it.  I’d been writing for ten years, and I couldn’t think of a thing to say. There had to be some peace, somewhere.  I was desperate to escape my disappointment and self-hatred, so I killed it, my writing, that part of me.  Writing couldn’t fight back, because it was in me, and my struggles with it were damaging me.  I announced I was done with writing, refused to think about writing, and said I was moving on. Done, Dead, Fini.

Except it wasn’t dead. Part of me knew I was able to write, just that I couldn’t or wouldn’t make a story happen at that point. I wasn’t going to write a book, but I would write letters. I wrote looooong letters to friends (in the days when people still wrote letters, before the internet killed written correspondence). I wrote notes to my mother and sister.  I wrote directions to patterns for the sewing classes I was teaching.  And I wrote Christmas letters.

My Christmas letters eventually became the highlight of my year.  I started them by mid-November, knowing I would need a month to create and polish what I wanted The World to know about Our Life This Year.  Each character would get his/her own summary of the year’s ups and downs. I chose a theme each year, opened with a question, wound up with an answer, and a recommendation for calming down, loving everyone and eating another slice of pie. I wrote, trimmed, condensed, and molded my story to fit a single typed page. I reduced margins, added my own illustrations and signed all our names.

I wrote every letter to a friend I had in mind as I wrote, as if I were telling the story to her.  And I wrote the ending until I cried. It was probably my favorite part of the process, because if I could write something that made me cry, I could be pretty sure my readers would feel my depth of emotion for the topic, and maybe they’d be moved, too.

Not all of the letters are in my Christmas closet, the cubby where we keep all the trimmings. Somehow I don’t worry about this much, because another friend has kept all of them, and I know she’ll send copies if I ask. It’s not so important that I have the record of them.  Writing those letters made me happy, and made other people happy. That was enough.  And yet…

Going back to my lack of interest in the summer’s writing this past month, I was wondering just this week – would I be able to kick start my writing a little bit, if I started my Christmas letter early?  I feel better, knowing I could have fun, writing another. Maybe it’ll start the juices flowing. And, since I’m wondering about it, I’ll also ask you the question:

How do you get yourself back in a butt-chair-write mood?

15 thoughts on “Is it Christmas yet?”