When I was but a wee lass attending the Ingram Publisher’s Showcase (may it rest in peace), Harlan Coben once gave a hilarious talk–with slides–about the progression of his book covers. One of these days, maybe I’ll be able to give a similar talk. It may go a little something like this:

Once upon a time, I was approached by Harcourt and asked about a cover concept for HERO. I was sent various pictures of various models holding various swords, from which my editor and I picked the one we felt most resembled Saturday Woodcutter. Here’s what we chose …and here’s what we got. Now, I really couldn’t complain — Girls With Foofy Dresses on the Cover have been proven to sell more copies by the Marketing Powers That Be. Plus, it more closely resembled ENCHANTED, which I was told to believe was a good thing, since ENCHANTED actually did pretty well.

And hey: it’s gorgeous. If Saturday had to be wearing a dress, she should be wearing the only dress she’s worn in her life, right? The one from the first ball in ENCHANTED. It actually *does* factor into the novel…in a sideways sort of fashion.

I only made a few nitpicky comments, just to be a Good Author and earn the “cover consult” we so painstakingly negotiated into the contract. One of those points was “Wouldn’t it be cool if there was someway to have dragons in the filigree?”

So they came up with this: …and again, I can’t complain because it’s just MORE GORGEOUS. Subtle and intricate and beautiful.

And then a Beatific Cover Angel descended from the sky and said, “Behold! Harken ye unto my words and your book will be adored by bookstores the world over.

So more tweaks were made. Some roses were added to the filigree, like ENCHANTED. A tagline was added to the top, not like ENCHANTED. Lo and behold, we once again had a new cover, blessed by the angels and now–once again–officially signed off on as the new-new-new-reallysupernew cover of HERO. 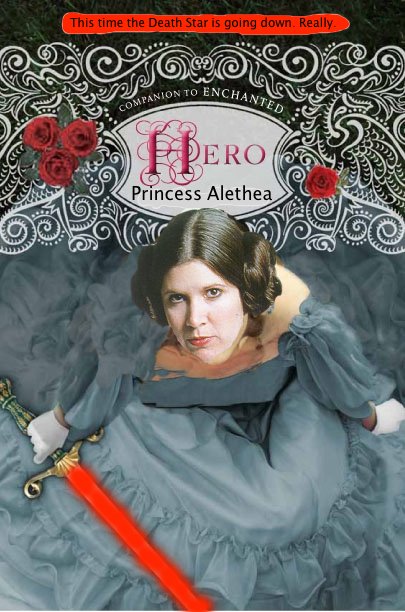 Your thoughts are welcome in the comments below. And, as always, sharing is encouraged.

14 thoughts on “A Tale of Four Covers”