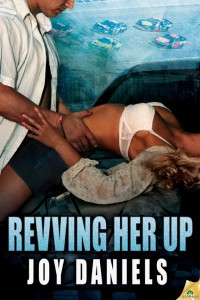 Q. How about the mini-bio and a little about your next big thing?

Joy said: Hi everyone! I’m thrilled to be here and to talk about my debut book and what’s coming next! “Revving Her Up” was released January 14, 2013, and is available now. Next up, I submitted a short story “Lights Out” to “We Love New York” an anthology to raise money for Hurricane Sandy relief. It comes out February 12, 2013 with Riverdale Avenue Books. I also contributed to “Fifty Writers on Fifty Shades of Grey” edited by Lori Perkins. Then soon, I’ll head back to Rapture, VA to write two more novellas (or maybe novels) in the Full Throttle series. Also, I’m planning a series about succubi and incubi. I submit where I think the story will do best. For now it’s Samhain and Coliloquy. I’m thinking of pitching my WIP to LooseID and Ellora’s Cave.

My editor at Samhain is Christa Desir, who is fantastic! And my agent is Louise Fury! I started writing December 28, 2008 (yes, I remember the date) after getting a Master’s degree in oceanography and spending 15 years in the environmental policy field. I had no writing aspirations before that – or they were so deeply repressed I wasn’t aware of them. Got my first offer for publication (from Samhain for “Revving Her Up”) just over three years later.

Q. What was the most surprising personality trait you discovered about your heroine in Revving Her Up? Your hero?

Joy said: Heroine: Sarah Lange is a strong woman who has been attracted to all the wrong sorts of men. In Revving Her Up she realizes that she needs an equally strong man like Cole. Someone she can trust and lean on, not a man she can boss around. Hero: Cole Cassidy’s previous experience with “city girls” made him much more defensive and prejudiced than he’d admitted to himself – so much so that he judges Sarah at first sight, because of her license plate and New York accent.

Q. What was the most challenging moment you experienced as you worked toward your debut novella?

Joy said: The most important aspect of any story is not the series of events that happen but how those events are experienced and perceived by the characters. Understanding how and why to switch between POVs to give the fullest sense of those experiences was my biggest challenge. (Was it a coincidence that my second novella was done in the first person? Hmm…) 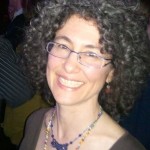 Q. What’s the best-kept secret about your writing process?

Joy said: Fast Draft (as conceived by Candace Havens) all my first drafts – 5k/day everyday (except Saturdays) until I have something that resembles my story. Then I use a shortened version of Holly Lisle’s “How to Revise Your Novel” process to get through revisions. Once I found those two processes, I became much, MUCH more productive.

Q. What character are you writing (or have written) that keeps you up at night – just one, please:)?

Q. What real person, television or fictional character has had the greatest influence on your writing style and why?

Joy said: My background in science and technical writing had a huge influence on me – I tend to write sparely (too sparely sometimes) and focus on getting the narrative down first. At the risk of sounding totally pretentious, one of my favorite classic authors is Ernest Hemingway. At the other end of the spectrum (length and depth-wise) I love Diana Gabaldon’s writing and storytelling style.

Q:What book title (or author) is the current “hot read” on your bookshelf?

Joy said: I was on a huge epic fantasy kick but now I’m getting back into urban fantasy. I recently read the latest releases from Christina Henry, Laura Resnick and Diana Rowland and loved them, and I’m looking forward to Kim Harrison’s latest release. I’m also reading “The Black Count”, the true story of Alexander Dumas’s father, a half-slave, half-noble Frenchman who became a general in Napoleon’s army and inspired both “The Count of Monte Crisco” and “The Three Musketeers.”

Q. What’s your favorite drink on a chilly Thursday evening in January – and who (fictional or not, friend or family, celebrity or historic figure) would be sitting at your side enjoying that drink with you?

Joy said: During the day, it is herbal tea, especially rooibos with steamed almond and coconut milk, a drink that my South African agent got me ADDICTED to. Every evening I drink a glass of dry red wine, preferably a South American Malbec.

Thank you Joy! Now readers it’s your turn. We’re going to giveaway an e-copy of Joy’s novella to one lucky commenter. So ask her questions, or just comment and join the celebration here in the Waterworld Mermaid pond for Joy’s “Revving Her Up”!

15 thoughts on “Debut Author Joy Daniels Swims with the Mermaids”