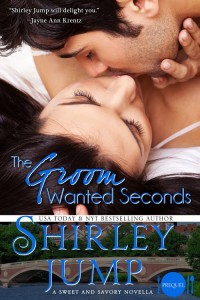 Sweet, funny, witty and tear-jerking.  That’s the best way to describe all Shirley Jump’s books, and soon-to-be released novella The Groom Wanted Seconds is no exception.  Jeremy is your typical engineer.  Young, smart, ambitious and very much in-the-box kind of guy.  So when his girlfriend Rebecca dumps him, after he proposes to her, Jeremy is bewildered.  After realizing he’s lost the best thing he ever had, he tries his hand at winning her back, but can he do enough?

Rebecca loves Jeremy, that she knows.  But she’s never been a priority in his life, mainly because Jeremy is so focused on his career.  Reliable?  Yes.  Dependable?  Yes.  But spontaneous, passionate, exuberant?  No, Jeremy is a bit too staid for that.  Besides, his eye is on the career prize.  Tired of being in a predictable relationship where she isn’t number one, Rebecca breaks up with Jeremy and that’s where things get fun.

At first, Jeremy tries the usual tricks, delivering white roses, but Rebecca isn’t having it.  Hadn’t he heard she doesn’t particularly love roses?  When none of the standard tricks work, Jeremy tries a unique approach and thinks outside of his box.  Now, Rebecca’s interest is captured.   But can she allow herself to fall in love?  Through twists and turns, Jeremy and Rebecca stumble toward each other, until both realize it’s better to be scared and together than alone and apart.  Oh, and then there are the recipes.. lots and lots of amazing recipes.

Shirley Jump  has sold over 50 novels and now writes for Harlequin/Silhouette and Kensington Books.  She has won countless awards but what is even more amazing is how much time she spends helping aspiring authors.  I took an online course with Shirley and the woman kicked my behind from here to Antarctica.  Her ability to analyze and pick out problem areas is almost crazy scary.