As many of you know (from my agony over the past month) I’ve been stuck in a rut with my story.  I’ve known about the story, actually wrote it a few years back, only to find out it just doesn’t have that certain, whatever it is a good story needs to have.

My idea for the original story came from a research session into the history of my ancestors.  My paternal grandfather came from Romania, the land of Transylvanian Alps (Carpathian Mountains), Vlad the Impaler, Bram Stoker’s- Dracula and various other mysterious stories that have been sensationalized.  But with all the fiction and history the general  populace know of, I wanted to delve deeper.

Two years ago I researched a bit into the early days of Romanian history, back before the Roman conquest, and found out about the Dacian clans who had ruled in the late B.C. to early A.D.  What I could find on them interested me–they were known as a powerful, mysterious people in a land infused with darkness and the unknown beyond the Danube where many other cultures and warriors had failed to conquer.  They worshipped powerful gods and prophets who considered them ‘immortal’ warriors . . . hmmm, see where I’m going with this?  I always wondered if this is where Bram  got his inspiration.

So out came some first draft stories based on this culture.  I’ve done a few other stories since then but this one came back to haunt me.  For the past few months it’s been eating into my soul, itching like a rash that won’t go away.  But no amount of lotion could fight it.  Finally I sat down, researched my craft–plotting (with the help of my fabulous Critter group), GMC, Deep Story  and some author friends who sat down with me and encouraged me to write from my heart and plot with my head.

So what does ‘Zmeu’ have to do with this, you ask patiently?  Getting there!

I went back the past two weeks and plotted an 11 page synopsis–for me.  While I was plotting I researched Romania again–everything from cities to ancient Dacian ruins, to airline schedules.  Along the way (as the Internet is known to do) I stumbled across an interesting creature known in Romanian folklore as the Zmeu. 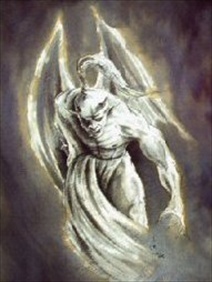 A zmeu is a mythological creature of humanoid qualities that can shape-shift, has extraordinary powers and was always considered the evil creature. He was sometimes known to have taken the shape of fire-breathing dragons–stealing the fair maiden who was always rescued by the handsome youth once he’d conquered the ‘evil-greedy’ zmeu.

Well, pooh!  Who’s to say I had to have a handsome youth as my hero?  Why not a zmeu?  So with my ‘what if’ attitude and my Muse toying with my brain, I excitedly wrote out my story and started in on a journey of  Fast Drafting for the next two weeks–drafting the first 70,000 words to my new/old story with my dark, brooding ancient zmeu and a woman destined to love him.

So far my zmeu has led me on a journey flying high on his winged back into fantasy scene after fantasy scene and though 5,000+ words a day is tedious to accomplish–he seems to keep my spirits soaring.  Research led me to him and he is inspiring me to write his story.

I’m raising my morning cup of vanilla bean latte in honor of research, inspirations, muses and gut instincts that get us through to our goals.

Do you have a personal ‘Zmeu’ to see you through?  I would love to hear about him.

24 thoughts on “What’s Zmeu with you? Or How Research Helped Me Find My Story Nitch”