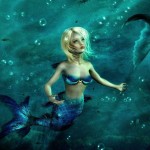 Are you surprised to read that?  I was too a few weeks ago when the words splashed across my TV screen as I sat watching a Spanish language news channel with my mother-in-law.  Mi suegra (my mother-in-law) is much more comfortable with her native language so out of respect to her, when she comes to visit, we become a Spanish-speaking household.

Back to Mrs. Clinton—I couldn’t believe it when I saw the short bit of her giving a speech which had been mostly muted by the news station and the word retiro below her.  When I later found my husband to tell him about the shocking retirement, he—a politico junky—obviously didn’t believe me.  I insisted I’d just seen it plain as day on the news.  I told him in Spanish, “Hillary Clinton retiro!”

He said, “Gueras (blondie—my hubby’s nickname for me), that means she went on vacation.  As in a relaxing retreat.”

“Oh.”  Ooops.  And I consider myself fluent in Spanish.

Are you like me?  Fascinated by other cultures, hypnotized by different accents?  Are you prone to introducing your American girl-next-door to the ultra-magnetic Aussie, Brit, or Latino?  And when they enter into conversation, have you researched your characters enough so that you are confident they are not saying something their great-great-grandparents might have said back in, oh I don’t know, the really old days?

And is internet research really enough?  I once wrote about an Aussie who was supposed to be from this century and in a rock band.  I could hear his voice, with all the rhymey things he did to the end of his words, but I wanted the phrases themselves to be authentic.  The online Australian urban slang website I was using to find these terms spit something out at me one day.  It said, Carlene, try “Fair dinkum.”  I don’t know about you, but does a guy who wears his wallet on a chain, Doc Martens, and has a neck tattoo peeking out from his always black t-shirt sound like he’d utter the words, “Fair dinkum, mate.”?

Exactly.  There was only one way to be sure.  Accost the mom on my son’s football team who happened to be from Australia without seeming like a crazy person.

As far as I can tell, living breathing people are my best tools for researching authentic cultural dialogue.   But when there’s no one in your rolodex from Ireland, Jamaica or Brazil, what do you do to ensure you’re getting it right?  Seriously, I need to know!  Please do tell.

And for the readers visiting this blog, do you worry about this when you read a story?  Or do you leave it to the author’s artistic license?  Is it really that important to you?

The first person to leave a comment answering what FIGJAM stands for gets a Mermaid surprise!