I woke up at four-thirty in the morning the other day with an idea for a scene and instead of rolling over and going back to sleep like any sane person, I instead rushed out of bed and down to my computer to spend the next two hours writing. Why you ask? Because I’m a writer and that’s what writers do. We take our thoughts, ideas, dreams and musings and transfer them to the page, hopefully, creating dynamic characters, witty dialog and conflict along the way.

But why lose sleep? How important could one idea be anyway? I mean really, people have hundreds of ideas everyday. Is one idea really so important that you should stop every thing? Roll out of bed to get it down before it evaporates into the floating mists of dreamland? Can one idea for a book or a scene or a character really change the world? Heck yeah! Some people would disagree with me, but for those people I have only two words: Harry Potter.

Think of how many millions of fans on continents around the world have been affected by the Harry Potter books and movies. None of that would have been possible without J.K. Rowling taking the time to get her ideas down on paper.

Joanne Rowling first conceived Harry Potter in 1990, while on a crowded train from Manchester to King’s Cross station in London. She began writing the first story longhand in 1991 while teaching English as a foreign language in Portugal. Fighting depression after a failed marriage, she returned to her native Scotland in 1993 with suitcases half full of different versions of Harry Potter stories. Struggling to support herself and her daughter, she continued to write the books in Edinburgh cafes during her daughter’s nap times when she wasn’t working. In 1995 she finished the first book, typing it out on an old typewriter and submitting it.  It took six years for Joanne Rowling to bring that first glimmer of an idea to the published page, but she didn’t give up, even after being rejected by several publishers. Can you believe it? I bet those other publishers feel pretty silly now! 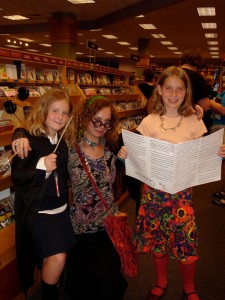 Beginning with the 2000 release of Harry Potter and the Goblet of Fire, booksellers around the world began holding midnight release events with games and live entertainment to coincide with the release of Rowling’s books. Anxious fans would line up around the block, some dressing up like characters from the books, to be the first to get their copies. This was the first time in history where people would line up around the block to get a copy of a book! To bittersweet fanfare the final book, Harry Potter and the Deathly Hallows was finally released on July 21, 2007. It had taken 17 years to bring her original idea, thought up on a crowded train, to fruition and get the whole story on the page and into bookstores around the world. And a record number of fans lined up for it…Harry Potter and the Deathly Hallows sold 11 million copies in the first twenty-four hours. As of June of 2011, the book series had been translated into 67 languages and sold over 450 million copies. The world built throughout the Harry Potter book series has even been turned into a theme park in Orlando, Florida.
And all of this stemmed from one woman’s idea. So let me ask again—how important is an idea?

9 thoughts on “Wizards, Witches and Muggles, Oh My!”