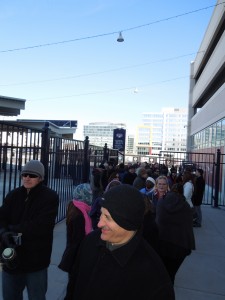 The line outside National Stadium

I’m frustrated. There it is, I’ve said it.

At the beginning of March my thirteen-year-old daughter, Brenna, was one of the lucky few selected to audition to sing the National Anthem before one of the Washington National’s baseball games this season. Let me tell you, auditioning is not a walk in the park. First, we got the e-mail on a Wednesday afternoon that she was one of fifty people who would be auditioning that Saturday morning. After chanting, “Oh crap, oh crap. Yay, this is so exciting! Oh crap, oh crap,” a few hundred times I rearranged everyone’s Saturday schedule so my husband and I could take Brenna to her audition. Brenna was incredibly excited and spent the next couple of days practicing with the Nationals audition guidelines in mind… You must perform a cappella and you only have ninety seconds, which is not a lot of time for that song.

We arrived bright and early at National Stadium on Saturday morning where we stood in line, freezing our butts off, for an hour and a half because auditions are first come, first served. But not to worry, the sky was a brilliant blue and we met a ton of nice people. The performers came from all walks of life. Some performed regularly, others only experience was singing in their church choir, but they were all incredibly talented and beyond brave to be there in the first place. The excitement was palpable by the time the gates opened at nine o’clock. After signing in, everyone was seated in the stadium—talk about an intimidating venue—where the performers are given instructions and told to expect an answer one way or another by close of business Monday. 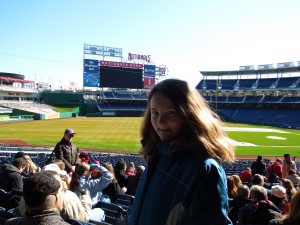 I was practically having heart palpitations by the time Brenna walked out onto the field. She approached the microphone with purpose and—outwardly undaunted by the camera four feet from her face, the three radio stations recording her, the size of the stadium or the audience watching—she opened her mouth and began to sing. An interview with Brenna was featured on WTOP most of that day so I’ll let you be the judge on how she did. When you listen to the one-minute clip that is my baby girl singing in the background! 😉

If I had a nickel for every text I got from Brenna that Monday I would be a very rich woman. Unfortunately, we didn’t hear on Monday. Or Tuesday or Wednesday. In fact, it has now been more than six weeks since Brenna auditioned and we still haven’t heard anything from the Nationals. I have emailed twice but still no answer. I can only assume that no news means she wasn’t selected but I hate not knowing.

Not hearing is frustrating because there is no closure, but it is also a part of life. I can’t help but compare the experience to submitting a manuscript. You plot, you plan, you write, write, write. And then—when you think your baby is ready—you pitch it at a conference or send out query letters to editors or agents you think may be interested in the story you have to offer. Then you wait…

Most agents and editors will tell you to expect a six to eight week turn around, but I wouldn’t hold my breath. I have heard horror stories of manuscripts being submitted, and then not receiving a response for six or eight months. At the Washington Romance Writers Retreat this past weekend I asked agents and editors their thoughts on following up on your submissions, because who hasn’t agonized over the do-I-follow-up-or-leave-things-alone-and-continue-to-wait dilemma.

Every editor or agent I talked to gave the same advice: If the guidelines say a six to eight week turnaround, wait at least three months and then if you haven’t heard anything… follow up. Just send a polite e-mail reminding them of your submission titled “A Great Story You Know You Want To Buy” (or whatever your title may be) sent in on such and such date, and ask what the status of your submission is.

Generally speaking agents and editors are not monsters hell bent on driving you to the crazy house. They are real people with real lives and a job to do, but life happens and sometimes they fall behind schedule or your manuscript gets lost in the shuffle. So if you find yourself in this predicament don’t agonize, wait at least three months and then follow up. 🙂