In February 2015, I filmed my last Fairy Tale Rant. Episode 55. I promised that I would be back “in the Fall,” but I couldn’t make that happen. As much as I missed posting videos and video blogging, it just didn’t pay the bills. (I also wasn’t sure how to make a successful Patreon campaign for it–I’m currently looking into that.)

After meeting with a representative from Patreon over SFWA’s Nebula Awards Weekend, I tried watching the Rants from a different point of view. Even then, it was hard to see the forest for the trees. I was too close to the project. Since I flew directly to Kate 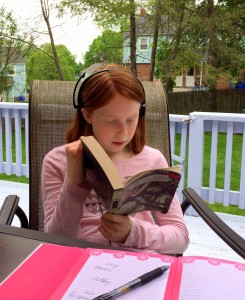 Baker’s house after the conference, I sat down with her girls–Lexie (16) and Allie (11)–and asked them to watch a few episodes and give me some feedback.

Allie didn’t just fall in love with the Rants, she fell for the entire Alethea Show. She watched other rants on her phone. I gave her the audiobook of Enchanted, which she immediately began to read ALONG WITH THE BOOK. (You know, like we used to do as kids, but we’ve gotten so old and jaded that we forgot how awesome that was.) She also took notes as she read, writing down her favorite quotes from the book.

And, somewhere around Chapter Seven, she asked if she could film a video with me.

One does not say no to such a dedicated fan.

But I will admit, I put her off for a while. As some of you know, on May 1st I sprained my right ankle so badly that I couldn’t walk for two weeks–two weeks that included both BEA and the Nebs. As soon as I got to Kate’s house afterward I started trying to walk with the boot, a slow and painful process. I have learned from experience that when I’m not “feeling it,” I can’t bring that into a performance, because my audience can absolutely tell. But I also couldn’t let Allie down. So, last Thursday afternoon after school, we shot some video for a Rant.

I made it clear to Allie that SHE was the star of this one, and that I was just a guest on her show. She needed to put on the tiara and makeup. To frame the shot. To look into the green dot that was her “fairy audience.” To project. To do several dozen takes of the same thing, for one good edit.

Most of the things I have learned in my life, I have learned by doing. If nothing else, we were 1.) having fun, and 2.) Allie would be able to give me much more constructive feedback on my own Rant series.

She and Lexie left for their dad’s house on Friday, and I made it my goal to edit the video as a present for her when she got home. And I did. But I hadn’t posted it yet. (You can watch it here.) 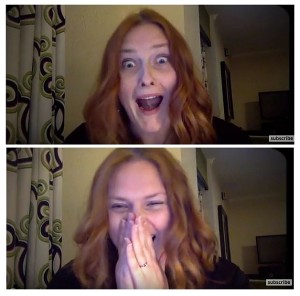 Now…while all this was going on, Kate was prepping for a Date with Chris Pratt that she’d won, courtesy of Omaze. They called her the first night of the Nebs to tell her she was a finalist and invited her onto a Skype call…during which they sprang the news that she was a winner. (In case you missed it on The Today Show, you can watch that video here.)

She would have to fly out on May 31st for a Guardians of the Galaxy Vol. 2 studio tour and lunch with Chris Pratt on June 1st (which I imagine is happening RIGHT NOW). She could bring one person along with her…but she has two daughters! However, the rules said “13 and up,” so she had no choice but to take Lexie. Lexie, of course, knew none of this. So we surprised her on a video of her own, by telling her that Omaze wanted family reactions to Kate’s win. (Watch Lexie’s video here!)

On Friday night, Omaze called and told Kate that they’d like her to bring Allie along too.

Pretty sure Kate and I both cried at that news. Good tears. Because Allie really had been so awesome and mature about the whole situation–she totally deserved it.

We absolutely wanted to surprise Allie on video, just as we had with Lexie. But how were we to pull it off so that she didn’t suspect anything? Thanks to her Fairy Godmother Alethea, we already had the solution to that problem!

That’s right…I lied to my Fairy Goddaughter and told her we needed to reshoot the intro, just so we could get her reaction on tape.

What a wonderful moment — something I was so happy to be a part of! The Universe could not have given me a better gift. The Universe, and Omaze. And Chris Pratt. Thanks, you guys. This Fairy Godmother appreciates you more than you will ever know.

Princess Allie — I love you and miss you and hope you are having the time of your life! I can’t wait to see you in Florida next month!! xox