Love is out there everyday of the year, in its many different forms and shades of dark and light. With it being February, a notoriously romantic month, I have searched my private library, and found something old, favorited, and exemplary to share with you, fishy friends. It comes to you from the singular Gaston Leroux and a certain masked man named Erik who has never received kindness except from one young woman who has allowed him to kiss her forehead, and not run away. Hush now while I extinguish all lights and blow out all candles, save one, for you to read by. Of course, you may know him simply as, The Phantom… 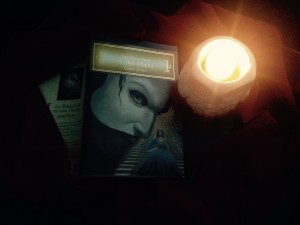 And Erik fell into a chair, choking for breath:

“Ah, I am not going to die yet… presently I shall… but let me cry! … Listen, daroga… listen to this. While I was at her feet… I heard her say, ‘Poor, unhappy Erik!’ … And she took my hand! … I had become no more, you know, than a poor dog ready to die for her. I mean it, daroga! I held in my hand a ring, a plain gold ring which I had given her… which she had lost… and which I had found again… a wedding ring, you know. I slipped it into her little hand and said, ‘There! Take it! Take it for you… and him! It shall be my wedding present–a present from your poor, unhappy Erik. … I know you love the boy… don’t cry anymore! … She asked me, in a very soft voice, what I meant. Then I made her understand that, where she was concerned, I was only a poor dog, ready to die for her… but that she could marry the young man when she pleased, because she had cried with me and mingled her tears with mine!…”

Erik’s emotion was so great that he had to tell the Persian not to look at him, for he was choking and must take off his mask. The daroga went to the window and opened it. His heart was full of pity, but he took care to keep his eyes fixed on the trees in the Tuileries gardens, lest he should see the monster’s face.

“I went and released the young man,” Erik continued, “and told him to come with me to Christine. They kissed before me in the Louis-Philippe room. … Christine had my ring. … I made Christine swear to come back, one night, when I was dead, crossing the lake from the Rue-Scribe side, and bury me in the greatest secrecy with the gold ring, which she was to wear until that moment. … I told her where she would find my body and what to do with it. Then Christine kissed me, for the first time, herself, here, on the forehead–don’t look, daroga!–and they went off together. Christine had stopped crying. … I alone cried. Daroga, daroga, if Christine keeps her promise, she will come back soon!…” 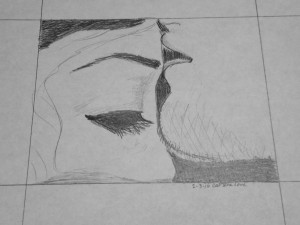 The Persian asked him no questions. He was quite reassured as to the fate of Raoul Chagny and Christine Daae; no one could have doubted the word of the weeping Erik that night.

The monster resumed his mask and collected his strength to leave the daroga. He told him that, when he felt his end to be very near at hand, he would send him, in gratitude for the kindness which the Persian had shown him, that which he held dearest in the world: all Christine Daae’s papers, which she had written for Raoul’s benefit and left with Erik, together with a few objects belonging to her, such as a pair of gloves, a shoe-buckle and two pocket-handkerchiefs…………..

I am always struck by how little it took to fulfill the giant hole that was Erik’s heart. The single kiss on the forehead proves that kindness to others is one of the biggest gifts we as human beings can offer in this world. I hope you receive, in this lifetime, if not a thousand cherished kisses, but at least one. At least one kiss that fills your heart as it did for this man, this monster, this hero.

Fishy kisses to you all,

Excerpt taken from The Phantom of the Opera, by French mystery writer, Gaston Leroux, 1911, from the English translation by Alexander Teixeira de Mattos.