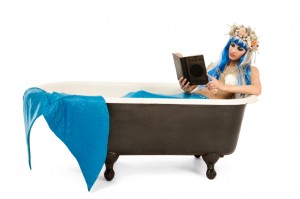 Okay, maybe that’s not exactly the question. The real question is whether to write under your own name or under a pen name?  Well, there seem to be a lot of differing opinions to that ever-important question.

First, let’s start with why someone might write under a different name. Well, why would a super hero have an alias? For privacy of course. A lot of people choose to write under a pen name for the same reason. I mean think about what would happen if everyone knew you were a super hero? Fans hassling you all the time to sign autographs, take pictures with them, begging you to make public appearances so you can rescue their cat out of a tree. I’ll be honest, I suck at getting cats out of trees but it might be nice if someone, someday thought I was fabulous enough to ask for my autograph. 🙂

Or maybe you work in a position where you would rather people not know that you are also a superhero book writer by night. If, for example, you were a kindergarten teacher and you write erotica you may not want the parents of the kids in your class to know that. We all know that writing erotica does not a pervert make, but there are those small-minded individuals out there who might think that it makes you less qualified to teach their little angels. Those same people seem to forget that those little angels wouldn’t be here if they weren’t occasionally turning up the heat in their own lives.

Another reason to write under a superhero name may be in an attempt to appeal to a more diverse audience. Joanne Rowling for example, was asked by her publisher to pick a more androgynous pen name in hopes of appealing to a wider audience. She does not have a middle name so she borrowed her grandmother’s name, Kathleen, and writes under J. K. Rowling.

I considered using a pen name but ultimately chose to write under my own name, as do most of the writers that I know. Why you ask? Because I think your name is unique to you and brings with it a certain amount of your heritage. I don’t work in an overly judgmental career, so I didn’t see any reason to hide my identity. I am fortunate to be surrounded by so many supportive friends and family, and honestly most of them don’t care that I’m a writer, unless it means I can get them an autographed copy of a book. 🙂 And basically, I want to take credit for my work under my own name. I think it would be wonderful to have someone think enough of my writing to travel to an event to get my autograph or have their picture taken with me. I mean really, how cool would that be? There may come a time when a pen name might be beneficial if I decide to take my writing in an entirely new direction, but for now I will write as Dana Rodgers.

Now it’s your turn. Do you write under your own name or a pen name, and why?