I am excited to finally have the very first book I started writing five years ago (when I decided to go professional as a writer) ready for release! 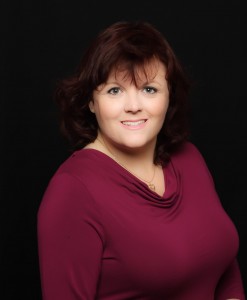 Immortal Heat was so much fun to write. It started out when I began researching my family heritage. My paternal grandfather was actually Romanian by birth. For years I couldn’t find out much on Romania due to the fact it was a communist country and at the time, the Internet wasn’t even around. Now with the handy little tool you can not only research a place you’ve never been but virtually go there via Google Maps.

The more I delved into the history of Romania I found some fascinating story lines. I didn’t want to do Vlad Dracul since he’d been done so many times so I delved deeper–all the way back to Pre-Roman conquest when Romania was known as Dacia.

What I found out about Dacia was that the Dacians were a mystical people. Their clans went into battle carrying flags and banners in the shape of dragons to scare off their enemies. Until the Romans second conquer–(the first attempt failed)–they were protected by the dark, mysterious forests that surrounded them. Other countries refused to cross the Danube because they were afraid. Even the god they worshiped, Zamoxlis considered his warriors ‘Immortal’.

What great fodder for a paranormal novel, right?!  I was so excited!

As I worked and researched further, I read about their folklore and found an interesting creature known as the Zmeu. A shapeshifter who would turn into smoke, sneak into a woman’s bedroom and seduce her, take her to his lair only to have the handsome warrior come slay the Zmeu and rescue the fair maiden. The Zmeu could shift into any form, but he was known for his human abilities and those of a Balour or Dragon. He was the equivalent of the ‘boogeyman’ to children in folklore.

But I didn’t see the Zmeu as evil. I figured if he was ‘Dragon’ then he might have been a gift from the gods to go into battle with the Dacian warriors. His kind might have even been sacred. So I created him as my ‘hero’ and Draylon Conier (pronounced Con-yea) came to life. Think of raven black hair with electric blue eyes and just enough shadow of scruf to make you think of waking up to just a touch of whisker burn– 😉 .  There are some pretty serious scenes that my beta readers think are pretty smokin’. So yes, there is HEAT in this book–more ways than just the title.

Immortal Heat is the first book in my new series, The Guardians of Dacia and also my first attempt at self-publishing. I had so much wonderful help in creating this book, a little secret, my daughter Jengi created the cover and my good friend, Magda Alexander helped me with formating and self-publishing support. I have a wonderful editor, Judy who worked diligently with me to make sure all the loopholes were covered–not easy in a paranormal where you create the world to work for you.

So without further ado–I present Immortal Heat, Book 1 in The Guardians of Dacia series! 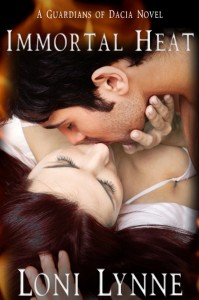 The Guardians of Dacia Series

Romania has been called the mystical land of paranormal beings and creatures of the night. Before the Romans conquered their land, Dacia was a mystical land of magic and folk-lore until one man and his army destroyed the closely woven fabric set by the gods between man and beast. Now, cursed by their gods over two thousand years ago, one immortal clan struggles to maintain their private world while still learning to live and protect their human brethren while their enemy seeks power to destroy the new world.  But as the clans face extinction, a new generation of Dacian blood emerges to unite the clans once more. The world as they know it may never be the same.

Determined to study ancient Dacian folk lore abroad, Marilyn Reddlin’s plans are cut short when she is abducted by a dark haired stranger who insists she’s in danger. The only danger she’s in is losing herself to her abductor’s inexplicable seductive energy. Draylon Conier teaches her there is more to Romania than myth and fairy tales while sweeping her into a wild adventure of paranormal mystery and intrigue.

Thousands of years trying to pay back a debt, Draylon Conier is finally able to do so. Sent to capture a young, American student who is in danger while in Romania, he just has to send her back home. Easy enough for him. Unfortunately, Marilyn Reddlin is determined to thwart his every attempt—even telepathy. But there is more to her than meets the eye and the closer he gets to her, the more danger she is in, not only from the ancient immortal Dacian clans he’s trying to protect her from, but also his own sexual need.

History just got a lot harder.

They must find out what connection Marilyn has to Dacian history before Draylon destroys her when she succumbs to Immortal Heat.

Immortal Heat is available for Pre-Order on Amazon. The release date is October 6, 2014!

To read an excerpt click here: Immortal Heat and The Guardians of Dacia