The manuscript for my fairy tale novella, Trixter (available today!), was supposed to have been finished in January. I had not factored in home renovations, my father’s surprise birthday party, Marscon, houseguests and a dual book launch (Hero & Dearest).

So I found myself back in DC for the NoVa Teen Book Festival in early March, having an impromptu Mermaid Brunch with Kerri and Dana. I’m sure I whined about the fact that the novella still wasn’t finished, but I showed them the preliminary cover art and smiled when their jaws dropped. 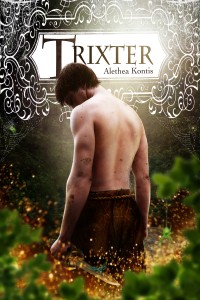 Cover design by Rachel Marks (the model is her son)

“Yeah,” I said, “it’s not exactly what I had in mind for the character…he’s really kind of scrawny in the book, but this cover is SO gorgeous that I’m going to keep it.”

Kerri and Dana–mouths still open–looked at me as if I was insane. (It’s a look I’m used to.)

“You have to do something about that,” said Dana.

“Your book is a fairy tale,” Kerri said vehemently. “Can’t you just…I don’t know…whip up a magic spell or something? Trix needs to look like this.”

Suddenly, the wheels began to turn. Truth be told, I actually had passed up the perfect opportunity to bespell Trix with such a “curse.” Fey children take longer to physically mature in my world…who’s to say I couldn’t decide to speed that up a bit? It was just the sort of spiteful, backhanded gift a Feline Fairy Godfather might give: Handsomeness, Strength, and Puberty. Even better, Trix could be so busy adventuring that he doesn’t even notice that Papa Gatto’s “curse” has taken hold…oh my, that would be amusing…

And then that moment happened–you know, the one where the clouds part and the angels sing. I smiled back at Kerri and Dana and told them I would name the magic potion after them, in their honor. (And I did.)

Yes, I am one of those annoying people who thinks everything happens for a reason. (I wrote an entire book about it–it’s one of the universal themes in Enchanted.) Regardless of your own opinion on the subject,  I am very glad that I had not finished the novella manuscript before I had that brunch. Kerri and Dana’s idea added a whole new facet to the book that I believe made for a richer story…and a more perfect cover.

So, have any of you had such epiphanies? Been frustrated by waiting and then thought…perhaps I was waiting for a reason? I’d love to hear your stories!