The question in the lagoon this month: What’s the one thing you cannot write without?

In early 2011, my decade long writer’s block broke open and I dreamed of a Steampunk universe that did not exist within the genre itself.

Nowadays I confidently write Steampunk adventures and culinary cozy mysteries, but I didn’t know that’s where I was going when I participated in my first NaNoWriMo in 2011. My anxiety about writing was so bad the only way to combat it was to write by hand so I did. I have several notebooks filled from that month to prove it.

In that Steampunk Universe Bible I created my main character had a sister that was just the cook, Alex LeBeau, while the group traveled, but LeBeau became something more and it was through the food she created. I used recipes to convey the undercurrent of the story mood or sometimes to give myself an inside joke to tickle me whenever I found the scene getting way too heavy.

For LeBeau the culinary school she teaches in, when not amateur sleuthing, is a place where she can create and work at solving a clue. It’s tactile. It’s facing a problem without much effort and that’s how many of us solve a problem, we do something not related to the issue.

This is the same way I plot, but I didn’t realize this four years ago. By utilizing my food history and food science education I have been able to create edible plots. 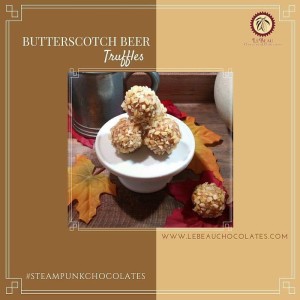 Please feel free to buy these for me for Christmas. Love, Alethea.

The food that makes it into my stories is a result of my plotting. Sometimes a story comes out from a ‘what if?’ scenario and other times it comes from discovering one item of food that is either unique or has a history behind it. Gunpowder tea has made its way into a metaphor, a plot point and a batch of cookies in my current WIP (another Steampunk Culinary Mystery).

Before I became confident in cooking, my stories were flat, but when I begin adding my researched food history into the story I found my voice. It not only added to a scene but made my Steampunk Chocolatier Alex LeBeau multi-dimensional. Food was another character for the ensemble cast to work alongside.

Soon after I submitted sample pages of this story to a critique group and had one beta reader tell me to remove the reference of food in my culinary mystery. Not tone it down, but omit it all together. Yes, let that sink in for a moment.

After all these years I admit that  it’s tough to know how to balance a character (food) you adore that is forever changing, but I’m learning and I wouldn’t have it any other way.

Nikki Woolfolk is the author of multiple Steampunk (Sweet & Steamy series), Cozy Food Mystery stories and a Professional Chocolatier. Nikki enjoys taking her readers on culinary adventures in a spectacular cogged and geared world with the perfect recipe of fun and adventure with a dash of wit! You can find her at:  www.NikkiWoolfolk.com and her chocolates at: www.LeBeauChocolates.com