The TV fangirl in me must speak out! This week two of my favorite shows are having (or had) their season finale, and I am excited, filled with apprehension (somewhat resolved by “New Girl’s” fantastically romantic ending – spoilers – STOP now!). And a bit frightened by what Sondra Rhimes has up her sleeves for this Thursday night’s SCANDAL season finale.

These two shows couldn’t be more opposite in their viewpoint on romance. And what’s über scary for me is that I am A-okay on either side of the romance fence the writers have constructed. I’ve talked about SCANDAL and whether or not a central ‘love’ story could be ‘written’ and allowed in the romance novel cyber book bin when one of the main characters is married and having an affair with the other main character (so, let’s not go there again:). Some of us like edgy, but…?!

New Girl, a sitcom about four just turned 30 roommates (or room-friends), is filled with what romance readers and writers look – great romance, conflict, and chemistry, a TV phrase that romance writers should use. We strive to show why two characters are attracted to each other, and watching TV shows where couples have ‘chemistry’ is visual (and sometimes hard to explain), but it’s there. (I tried to snag photos from the Internet that showed Nick and Jess in shades of chemistry:). But the show writers must also know their characters’ goals and motivation to take full advantage of that connection.

If you haven’t watched check out re-runs this summer or HULU for season one – but what is known to Internet fandom as NESS – Jess and Nick – the primary romantic journey in season two has ROCKED the socks of the hit show’s hardcore fandom (yes, I know this as fact – because I go to Tumblr where the true fans hang:). 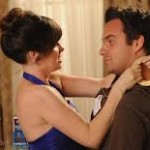 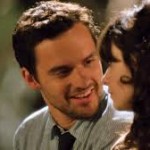 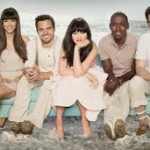 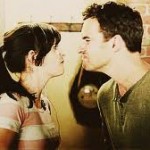 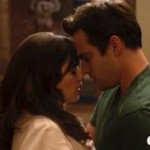 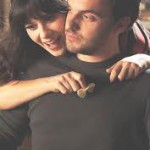 What I really like about New Girl (besides the cute hotness of Jake Johnson) is that the show has taken a HUGE risk in the TV world by not extending the angst or the ‘will they or won’t they’ issue. Because yes, they have, and yes, they are going to try and make it work! (This just made me smile when that was the choice the writers made for the finale! And the show is only in season 2). Some shows will take 10 years for the  clearly chemistry-packed, in love leads to commit (aka Friends, How I Met Your Mother, Bones), but I believe that REALITY TV has something to do with the shift in the TV viewers’ patience for ‘sex’ and ‘love’, and wanting it to take center stage sooner than later. New Girl is taking the curse of Moonlighting (1980’s show starring Bruce Willis) head on and I think they are going to win!