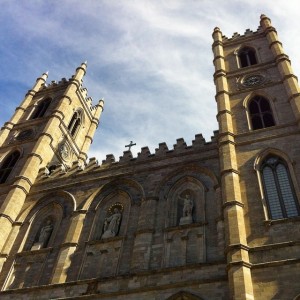 This past Sunday–my last official day in Vermont–my sister and her husband took me on a drive up to Montreal for the day. Despite life’s craziness, I’d thankfully had the presence of mind to grab my passport in anticipation of such an adventure.

Vermonters drive up to Montreal regularly: for an event, for the day, or for a weekend getaway. My brother-in-law used to deliver lost bags from the Burlington airport, which took him into Montreal so often that he makes both a fantastic driver and tour guide. We ate sushi and Greek food, visited the Notre Dame Montreal to light a candle for my nephew, and even stopped at a Chapters and Indigo so that I could sign some books (hooray, Canada for stocking all my YA novels!).

Mom and Dad and Soteria and I moved away from Vermont when I was six, so I hadn’t been to Montreal in my adult life. I found it lovely and fascinating…like being in France, only everyone speaks English. All the street signs and flyers are in French, and when you’re walking down the street past the outdoor cafes, all you hear is French. But when you ask a salesperson for help, they speak perfect, unaccented English.

I told someone once that my family was “French Canadian” in front of my Memere. She corrected me by firmly stating, “We are FRENCH.” I totally get that now.

I am a firm believer in travel–wherever you can, whenever you are able.
ESPECIALLY WHEN WRITING.

Most of Hero is spent with a witch and a dragon in caves in the White Mountains. While I did not have access to a witch or a dragon, I was only a few hours away from Luray Caverns, so I took a day trip there. I filled an entire notebook with phrases and words and feelings and impressions….the experience was invaluable to the writing of that novel.

But we’re not always that lucky.

When I was putting together Sherrilyn Kenyon’s Dark-Hunter Companion, the publisher asked me to include a full section on New Orleans, since that is where most of the books take place. This presented a problem: not only had I never been to New Orleans, but I also did not have the funds to travel there to do my research. I was forced to use what I had: the Internet, books from the library, and a friend who was traveling there. I read all I could, visited ghost tour and carriage ride websites, and pored over every pamphlet and picture Eddie brought home for me. And I guess the publisher liked it, because there were virtually no editorial comments made on that entire section.

The year after writing that–right before it was published–I was finally able to go to New Orleans with Sherrilyn Kenyon. There I was, visiting a place I’d never been, but I could have given my own tour. Everything was strange and familiar, all at once.

It was the second-most surreal location experience I’d ever had.

The MOST surreal was the time I got to visit the town I made up in my own head.

The first book I wrote as an adult (most importantly, the first novel I ever finished) was called HAVEN. (This was back in 2004, before *everything* was called HAVEN.) It was based on a town I’d made up in which to set my Possessed Scarecrow YA Horror Novel. I wanted somewhere in the midwest…like Kansas. But what should I name the town? Let’s see…if I was a Homesteader way back when, traveling across the US with no idea how long–or if–I’d ever reach another shore, and I decided to just STOP, what would I call that place? Well, for me, the tired Homesteader, it would be a haven…so that’s what I named it. Haven, Kansas.

Months later, long after the first draft, it occurred to me to type “Haven” into the Weather Channel website, to see if there was a town called Haven anywhere in the US. There was only one. Yup, you guessed it…

Fast forward a year or so, to a visit with my friends Tammy and Mark in Wichita. Over dinner one night, I mentioned my John Carpenteresque Kansas writing story. Mark–who grew up in Kansas–proceeded to tell me that Haven was only about two hours from where we were.

Obviously, we had to go visit.

Visiting the town was indeed surreal, but in a way that informed my writing. I took tons of pictures and made notes on things that would have been relevant to my novel. The most fascinating bit, however, was Mark…who spent the entire two-hour drive up there telling me what it was like to be a kid growing up in Kansas. I filled page after page in my notebook, and when I got home, I did my first full-out revision of that first finished novel.

[Edited to add: At the request of my agent, I am currently revising that manuscript again, so that we can get it out to some editors…she *loves* the story. So stay tuned!]

All of which is to  say: Never underestimate the power of travel. Write about a place you’ve never been, and then go there, or vice versa. Both experiences will change the way you do research for a story or novel when you can’t actually visit the location you’re writing about.

And then one day, when we’re rich and famous, we can travel to all of these places.

So…is your passport up to date?
Where in the world would you like to go?