Three Mermaids walk into a bar…

I just had to start out that way because back in July three Mermaids were in a bar. Alethea, Denny, and I were at a bar in San Antonio for a publisher’s party during the RWA Annual Conference®. When the party started dying down, we decided to walk back to our hotel. Because walking in the late-July Texas heat was our best idea? Turns out, we didn’t even notice the heat. 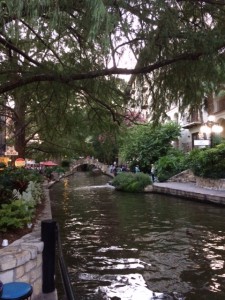 Scene of the Romance

As we made our way along the festive, color-bursting River Walk, a young man dressed in military uniform rushed by us. He was on a mission. And if the big bouquet of beautiful flowers said anything, it was that this mission was of the romantic persuasion.

So Alethea, Denny, and I did what any normal person who writes romance novels would do. We hiked up our fancy dresses and started following him. It didn’t take long for us to realize we weren’t the only people who took notice. Heads turned left and right. A man sidled up to the soldier for part of the walk. And before we knew it, there was a huge mass of people following us. If you’ve ever seen Love Actually and are familiar with the final scene when Colin Firth is walking through the village to propose and the whole town follows him – that’s pretty much what it was like.

As we neared his final destination, he picked up the pace. So did the rest of us. We weaved in and out of restaurants, around chairs and tables set up next to the canal, as the passing boat tours pointed out the sights and yummy wafts of Mexican food met our noses.

Finally, we reached a restaurant. As if the entire crowd was in on it, we all dispersed to different places and waited anxiously for whatever would come next.

The soldier didn’t miss a beat. He ducked around a couple tables, flowers still clutched in hand. Then he approached a table with an older couple and a young girl. Tapping on her shoulder, she turned, took him in. Surprise turned to shock turned to tears. And then they were embracing, flowers forgotten. Large crowd of cheering spectators forgotten. Hot, humid weather forgotten. 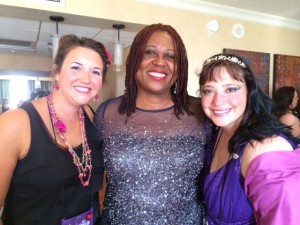 But romance. That was very much not forgotten.

It was really nice to think that during this big romance conference we actually got to experience an amazingly romantic gesture. And I hope that whatever happens with the two of them will involve many, many retellings of that magical, romantic night when a whole bunch of strangers followed a man in love.