How was your Thanksgiving, US folks? Mine was incredibly stressful, thank you. Oh, it’s all stuff I won’t discuss on the internet…you know. Suffice it to say that I hope yours went a lot more smoothly than mine.

In one way, though, my Thanksgiving was awesome.

Here’s what happened: The first day we were at the in-laws, Joe’s mom presented him with a handful of 4-5 inch tall comic book figurines. She had cleaned out something, somewhere, and despite Joe having no recollection of these items, Mrs. B was sure they were his. They were all posed for action: Wolverine, The Punisher (missing an arm), and Captain America.

I lifted Captain America to examine him. The stamp on the back read “1989,” which would have meant Joe bought these when he was at least 19 if they really were his…but they were his now, and within his power to redistribute as he saw fit.

I had my phone with me, so I posed Cap next to the apple butter and snapped a quick picture of him to share with my online friends, with many of whom I had spent previous Thanksgivings and was currently missing like crazy. As soon as the shutter closed on Instagram, I had an idea. A brainstorm. An inspiration that would save my fragile soul from the impending wretched holiday.

Because…see…here’s the thing. Authors have this amazing superpower they often forget about: They have the ability to create entire worlds in which people can escape from their lives. And before that author is published and read by millions of people around the world, there’s only one person escaping from life in that world: The Author Herself.

I desperately needed an escape…and I had just found it. I would tell a story.

As soon as I woke up Thursday morning, I began snapping photos of Cap. This was the first one:

This went on — off and on — all day long, posting my triptych via my Instagram app (crossposting to Twitter, Tumblr, and Facebook). . I used Cap as an excuse to get outside and go for a walk — it was chilly, but a gorgeous day everyone else was adamant about wasting inside. This resulted in my favorite pic, composition-wise: 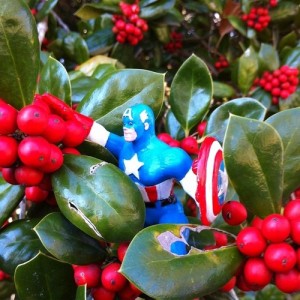 Turkey needs another hour in the oven…Cap takes this opportunity to get festive.

After dinner, Joe and I left the house again…because we were awake, incredibly stuffed, and Joe’s Grandmother needed a television. Coincidentally, a few places were having sales! Now, Black Friday is not a tradition with us, but this time I was raring to go. And so was Cap. 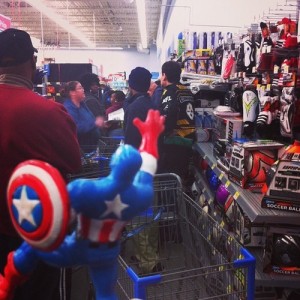 CAP IS NOT LEAVING HERE WITHOUT A TELEVISION.

While standing in line, I had a chance to check in with the internet and see how well this was being received. There were a few “Likes” on Instagram and a few replies on Twitter. Tumblr didn’t really give a crap.

Facebook, however, had exploded with comments…and these comments went on for a couple of days. Turns out, Cap wasn’t just saving my Thanksgiving…he was saving a lot of other people’s as well. And as those were people I care about, it made the result all the sweeter.

When all was said and done, did the internet remember an American superhero experiencing the trials of American Thanksgiving? No. They remembered a guy who got onto a plane and tweeted a fight with a woman that degraded into passing notes with foul language and a slap at the gate. Even better, this scenario NEVER HAPPENED. Just yesterday, the guy admitted it was all fake.

My fun little story didn’t get retweeted by Joss Whedon or Stan Lee. Marvel wasn’t banging my door down with a picture book deal, and I wasn’t picked up by BoingBoing or io9. Instead, some rude ABC Producer’s fake tweets got attention in every major news outlet, because–literally–at the end of the day, the sensational scandal won out. It always has, and it always will. I have to say, I was disappointed in America that day. Cap was too.

But in my magical little corner of the world, I made my friends smile. That’s what started me on this strange career, and that’s why I’ll stay on this path for the rest of my life. I am a Jedi who will continue to put good things out into the world. I will fight for the Goody Two Shoes and the Mary Sues…and Cap will back me up every time.

So…how was your Thanksgiving? 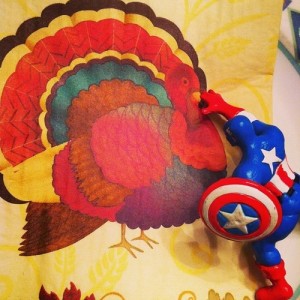 For those on Tumblr: http://www.tumblr.com/search/capsbestthanksgivingever (start at the bottom)