Here in our lovely mermaid lagoon, we are all abuzz with the holiday of love. And because we’re in such a happy mood, we wanted to share some stories and memories from mermaid-pasts. Best of all, we’re celebrating all week long! We hope you enjoy!

Today’s stories are guaranteed to melt your heart. Behind every beautiful flower, sparkly crystal and shining star are the real heroes. Here are some examples….

A soldier once sent his wife flowers for Valentine’s Day.  She would never know how he’d pulled it off.  It shouldn’t have been possible.  That big ole desert was far, far away and most days that year, even emails had been scarce.

But sure enough, three bouquets were delivered to her Oklahoma doorstep that morning.  Roses, Tulips, Lilies.

But soldiers do extraordinary things every day.  So when the wife sits and thinks about that Valentines, she doesn’t wonder for too long.  She’s just thankful.

My husband is not the most romantic man in the world.

But, every once in a while he surprises me.  Mother’s Day of 2005 was just such a day.  By this time, we’d been married for not quite six years, and we had four children.  Romance wasn’t really that high on our list of priorities.   We fell into a daily grind of getting very young children ready for the day and basically stumbling through it until we climbed, exhausted, into bed at night.

On this particular day, my husband arrived home to tell me that he bought me flowers for Mother’s Day.  I casually glanced around him, looking for a dozen long-stemmed red roses.  No such luck.  I grinned and rolled my eyes.  Typical of my husband to not get caught up in another commercial holiday.

After putting the kids to bed that night, we climbed into bed and watched Desperate Housewives together, and after it was over, I went to the bathroom to brush my teeth.  When I came back into the room, I saw a Reed’s Jeweler’s bag sitting on my dresser.

Jewelry trumps flowers any day of the week, as far as I’m concerned.  He was grinning at my surprised expression, and I tried to not tear into the bag.

When I finally looked, I saw not one but four little boxes.  Four!  When I opened the first one, it wasn’t jewelry at all.  It was something far better than that, something I’d been collecting for years.  Swarovski crystals.  This particular one was a pretty pink crystal flower in a vase.  The next box revealed the same one.  The final two were yellow flowers.  Four separate flowers to represent our four children—two girls and two boys.

I blinked hard to not let the tears fall because I really hate to cry in front of him, but, man, it was hard.  He knows how much I love Swarovski crystals.  Oh, and my kids, of course.   That was the best, most thoughtful present he could have given me.

Placing my beautiful crystal flowers on the dresser, I sashayed over to the bed.  I’m not sure how great I looked sashaying when I had a baby seven months before, but I did my best.

About two weeks later, I had to tell him that I needed another flower.

Flowers wilt.  Cards become compost.  But those five Swarovski flowers still sit in my curio cabinet, reminding me of my best Mother’s Day gift of all.  Not my flowers.  My daughter…Shannon. 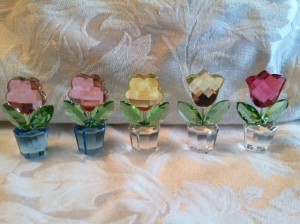 Several years ago my husband came home from work to find me on the couch in the fetal position. After a terse reminder that my abdominal pain had been getting increasingly worse over the past two days and me confessing the little incident where I just about collapsed a couple of hours earlier (I was fairly certain a Mac truck had been plowing through my living room and deemed it appropriate to rip out my intestines while passing by). My husband scooped me up and whisked me off to our local Emergency Room, chastising me for not calling him along the way.

Two hours later I was terrified. The plethora of tests revealed that I was pregnant, but it was ectopic. The fallopian tube had ruptured and the reason I was having severe abdominal pain, along with the overwhelming desire to sleep, was because I was hemorrhaging, badly. The doctor said that if I had gone to bed, I wouldn’t have woken up.

My husband held my hand all the way down the hall when they wheeled my gurney to pre-op and said all of the mushy things I needed to hear. It was one of the handfuls of times I have ever seen my 6’6, 230lb Marine get a little misty. (For the record, the other times involved a 14-month separation and the birth of our children–what a guy.) He was there when I woke up, stayed by my side in the hospital, and was there to support me through the emotional aftermath. (And trust me, that wasn’t pretty.)

A few months later, Valentine’s Day rolled around. I was thinking that we’d exchange cards, I might get chocolate, but since we don’t really buy into the commercialized holiday thing it wouldn’t be a big deal. I was Oh-So-Wrong! My husband strolled in that evening, grinning ear to ear, and handed me a letter-sized envelope and flowers. It was a star. My husband had named a freaking STAR after me. I mean how cool is that??? When I asked him why, he said that I was his compass and the light in his life, that I had scared the shit out of him and that he never wanted to be without me. Wow. I mean really, W-O-W!

So why do I write Romance? How could I not when I live with all that hero inspiration every day? I never want to be without him either.

We hoped you enjoyed our stories today. Come back tomorrow for more sweet stories that are sure to make you feel all gooey (in a good way)!