Today is the debut release of a fabulous book—5 TO 1—by Holly Bodger.  I first met Holly when we became Golden Heart® finalists together in 2013. We were both in the YA (Young Adult) category, and all of us YA writers bonded quickly. We had our own little loop called the Savvy Sevens inside of our bigger GH loop—The Lucky 13s.

Many of us in our category exchanged work before we ever met at the national conference, but it was Holly’s critique that either made me want to laugh or cry. She wasn’t harsh as much as honest. But then again, it was in a harshly honest kind of way. She would write comments in the margins like, “Meh” or “Hallmark moment,” and instead of getting upset, I laughed.

In my recent WIP, I mentioned my main character was a senior. Then again. And again. She started pointing it out with sarcasm after a few mentions in the first chapter: “Wait! He’s a senior? I had no idea!” Granted, the sarcastic comments only surfaced after we’d become friends and were used to reading for each other.

I have three CPs. The first pass always goes to Vanessa because she’s sweet and will bolster my ego. The second one goes to Pintip. She tells me all the turning points I’ve missed or that my black moment isn’t black enough. After I fix everything, and I think it’s just about perfect, I send it on to Holly. Then she rips it apart. But by then, I’m ready for it. So, I asked Holly about the people who read her books.  Here’s her response:

Every book is different, but these are generally the people who read my manuscripts before they go to my agent.

The Gatekeeper is scary. She has a whip and is not afraid to use it. I always send my books to her first because a) she knows she’s reading my crap and can read despite the complete lack of emotion, and b) she’s not afraid to tell me it’s crap. The Gatekeeper sends me lists of things that I need to fix before anyone else sees the book. Some of these lists are short. Some of them are long. Most of them have words in uppercase such as “WHAT IS SHE FEELING? IS SHE A ROBOT?” Oh, and yes, the Gatekeeper is Kim MacCarron and no, I don’t know (or want to know!) if she wears leather while reading.

I have many other readers, some who have been around for a few books and some who are new. Each of these writers has a different perspective which helps me see different things. Some will tear apart the plot, while others will focus on setting or characterization. Some will just say nice things that make me feel better after the Gatekeeper’s exclamation marks. The group includes my wonderful friends Amy, McCall, Jill, Loretta, Monica, Marybeth, and Pintip.

Eventually, the book goes to Kaitlin, daughter of the Gatekeeper, because she can give me a true reader’s perspective. Plus she can tell me when I do stupid things that make my teen characters sound like they should be wearing mom jeans.

For 5 TO 1, I was very lucky to have the always awesome Sonali Dev to help me with cultural details. In addition to the random questions I asked her while editing, I sent her the book when it was completely done so she could see if I’d missed something or got something totally wrong (a couple times, I even ran copyedit Qs by her!) I have used different expert readers with other books in the past (for example, I have contacted doctors, police officers and teachers). These people are invaluable. Without them, I would make stupid mistakes.

Yeah, she usually reads it again, but she uses less exclamation marks the second time around and sometimes, she puts little smiley faces and hearts in the margin. That’s why she’s a keeper. So if you’re reading this thinking you need the Gatekeeper in your life, HANDS OFF! She’s mine. And don’t think I won’t open a can of whoop-ass if I need to fight for her. I know Kung Fu. Well, sorta. I’ve seen the movie with the panda at least three times… 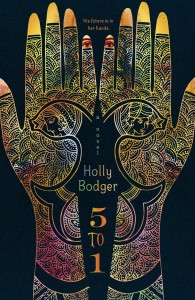 In the year 2054, after decades of gender selection, Koyanagar–a country severed from India–now has a ratio of five boys for every girl, and women are an incredibly valuable commodity. Tired of wedding their daughters to the highest bidder and determined to finally make marriage fair, the women of Koyanagar have instituted a series of tests so that every boy has the chance to win a wife. But after fighting so hard for freedom against the old ways of gender selection, these women have become just as deluded as their male predecessors.

Sudasa Singh doesn’t want to be a wife and Kiran, a boy competing to be her husband, has other plans as well. Sudasa’s family wants nothing more than for their daughter to do the right thing and pick a husband who will keep her comfortable—and caged. Kiran’s family wants him to escape by failing the tests. As the tests advance, each thwarts the other until they slowly realize that they might want the same thing. 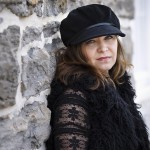 A long-time resident of Ottawa, Canada, Holly has been working in publishing since she graduated with an English degree from the University of Ottawa.