Friends, mermaids, romance readers, I have cornered the always fun Robin Covington in the lagoon to get the goods on all the really gossipy stuff about her latest release, His Southern Temptation, including how often she checks her sales numbers, how she manages to write so much and if she’s ever dated her own Lucky.

You ready to rock the lagoon?

OK, we just left a Savvy Author chat about getting it done. So give us the secret to making writing work in your life.

Hmmm. I have a husband who likes to have attention now and then and two small kids (10&8) and a full-time job as attorney for the Navy. So, my writing fits in around soccer, school, work etc. My only secret is learning to write anywhere with any snippet of time I can steal.

I love the e-mails I get from you about how you write in the car outside of the kids’ activities. Have you ever gotten any strange looks from the other parents?

Oh yeah. They all think I’m a little weird (and they are right) but I live in a small town and most know that I am writing one of “those” books and they just laugh.

LOL. Speaking of “those” books congrats on His Southern Temptation booking it up the charts. Tell the truth, how often do you check the numbers?

I have no shame – hourly. My iPhone makes my mania easy to maintain.

God, you make me laugh. OK, I’m biased when it comes to Lucky, your hero in His Southern Temptation. Did he start out as a spark of an idea or burst to life in living color?

I loooove Lucky. He burst to life in full, annoying, pesky color. He badgered me to write him first – I mean, why wouldn’t I? Right? But, Jackson (of the four men) spoke to me as the one to set the tone for the series and to give the perfect backdrop to bring all these guys back together. So, Lucky had to wait . . . and even when I wrote him, he surprised me with some of the twists.

I think just about every woman dated a Lucky at one point. Did you?

Oh yes – and I married him.

Speaking of Taylor (who I would also consider going Buffalo Bill for that body), she is a woman who is really dealing head on with the craziness of her life. She’s ballsy as hell. I saw a poll recently of readers and most said they wanted to see more strong heroines in contemporary romance. Do you think that’s true?

Yes, I do. When we take workshops or read about the craft of writing romance – we are told that we need to write women characters that our reader can relate to. The hero should be someone you could fall in love with and you should want to be the heroine. I think that women today are strong and brave and so talented in every way. They are also juggling so much stuff – so a heroine like that is what resonates. It might take the entire story for her to get there – but that is a ride they want to take.

So what makes Taylor relatable?

Oh – she is like so many of the women I grew up with in the rural South. We were good girls – not too good- but we did what was acceptable. I know that I and so many of them really found our own voice when we left home. Taylor did that and followed her own dreams – maybe to the extreme – but she found her way to be her true self.

That’s awesome. OK, I’m wrapping it up with the most important question I’ve ever asked you. You ready?

Don’t get Bomer? That gives me a sad. OK, let’s toast to your poor decision making. There has to be a bartender hiding somewhere in this lagoon.

Now that really is sad. 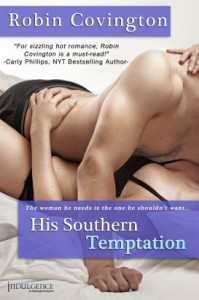 His Southern Temptation by Robin Covington
Some women are bad. Some women are a bad idea. The best ones are both…
As a Black Ops assassin, “Lucky” Landon has had more than his fair share of close calls. Now he’s turned in his sniper rifle for the simple life of his small hometown. So the last thing he ever expected was to end up at gunpoint. Or that the woman holding the gun would be his best friend’s little sister and Lucky’s on-again/off-again lover.
Taylor Elliott is Trouble, and she likes it that way. And seeing Lucky again? Well, he’s been her dirty little secret for the past few years and everyone knows that secrets in a small town are almost impossible to keep. But Taylor has bigger problems on her plate. Like the local mob boss who wants her dead.
And right now the only thing standing between Trouble and disaster is a hottie named Lucky…