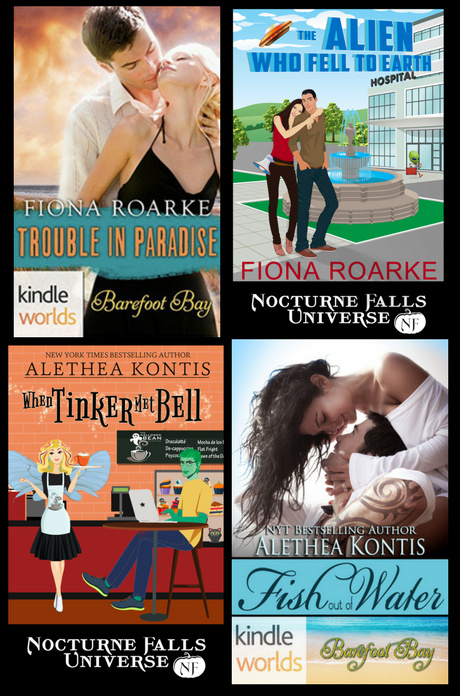 Fiona Roarke and I have the unique distinction of having written stories in the worlds of both Barefoot Bay and Nocturne Falls.

I can’t tell you how wonderful it is to have someone else around who is as quirky and adventurous a workaholic as me! She’s the SF to my Fantasy. And she also likes to name books after movie titles!

Fiona joined me in the January NFU launch with Close Encounters of the Alien Kind. This week we’re celebrating her third Alien novella, The Alien Who Fell to Earth. (Look for a boxed set coming soon!)

But what can I say…women who love books tend to be drawn to other women who love writing books. Only Fiona writes SO MUCH MORE THAT I DO. Trust me on that! I admire her so much that I invited her into the lagoon to tell us a little about her first novel…

The first novel or story I ever remember writing was when I was in the sixth grade. I had a crush on a boy named John M., but I was the new girl in school that year and didn’t rate much of his attention. Isn’t that the way so many romances start out? Sigh.

So, at the tender age of eleven, I wrote my very first what if scenario. What if the boy I had a crush on “had to” pay attention to me? What if I controlled the circumstances—like we were lost on an island? What if we were all stranded there together? What if there were four boys and four girls?

That very first story—which I wrote in long hand, with a pencil in a spiral, wide-ruled notebook—stranded me and several of my friends and classmates (without grownups, of course), sort of like a shipwreck. Perhaps I was influenced by Gilligan’s Island. My brother used to make me watch that endlessly when I wanted to watch Star Trek. But I digress.

I matched up the couples naturally. My imaginary “John M.” who found me completely intriguing in this imaginary island realm, chose me to be his girlfriend. We spent the days working together to find water and food and a place to live until “help” came for us, all the while stealing kisses and smiling at each other.  We did that quite a lot. (Some things never change. My editor can attest to the vast number of smiles and grins my characters exchange in the books I write these days.)

Though that particular story has never been published, fame came early in my writing career. I won second place in a short story contest at a local library while in my twenties and pregnant with my second child. That was a science fiction piece about a global virus pandemic involving a secret formula that forced everyone to tell the truth. What I mostly I remember about it was that the hero’s name was Jake. (Yes, my love that’s why your middle name is Jake, now you know the truth.) That and that the manuscript was supposed to be ten pages typed. Which it was … mostly. It was also single-spaced and had quarter-inch margins on four sides. Hey, I still won second place.

After hearing the phrase “write what you know,” my first full length novel was a boring basic business and work-related drivel that I’m pretty sure I set fire to as a gift to humanity. You’re welcome!

For my second attempt, I managed to get two hundred pages written before I landed in a gigantic plot paradox. One I couldn’t solve without bending physics or ignoring it altogether. And yet, I still refuse to plot to this day. Go figure.

Maybe it’s because I get totally psyched when I’m writing along and a really great surprise unfolds before me. I grin and then I smile, and write faster with gleeful intent in my heart. The utter joy comes through my fingers to the keyboard. Oh and I love, love, love a great twist that even I don’t see coming until it shows up  on the screen. Love it!

Would I have ever shown my first book to anyone? Perhaps if it wasn’t currently a pile of ash blowing in the wind. My second place, global pandemic truth virus short story is somewhere around here. I should look for that.

And in conclusion, I believe those early attempts added to the basic desire I had to keep trying to tell stories because that’s what I love to do, and I imagine I always will. 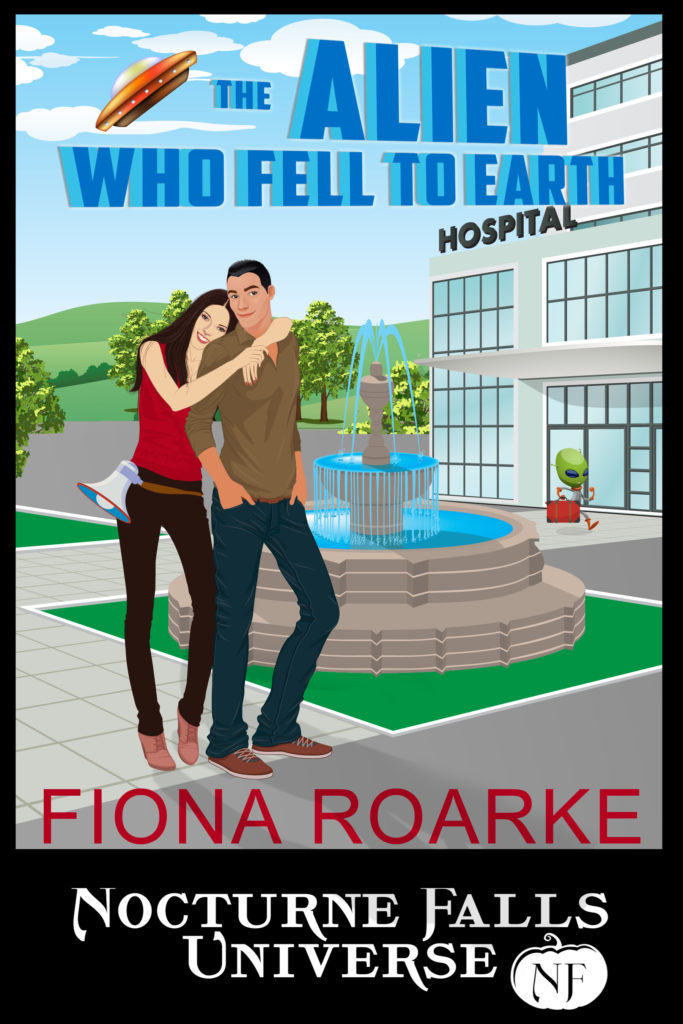 Crashed in the Georgia woods, all are lost on a world where aliens are the stuff of science fiction. But what if the locals are far from human themselves, with secrets of their own?

Holden Grigori is lost on an alien world, and his memories are just as lost. All he knows is a beautiful woman says she’s his wife, she loves him and he’d do anything for her.

Security specialist Victoria Greene’s mission is to find the heroic pilot of a downed spaceship and keep him safe while he recovers in a human hospital in the Halloween-themed town of Nocturne Falls, Georgia. Part of her ongoing mission is, as always, to keep the humans from realizing that aliens walk among them, hiding in plain sight.

Pretending to be Holden’s wife is far from a hardship. Falling in love with him is even easier. But what will happen when he gets his memories back and realizes that to him she is … no one.

Fiona Roarke is a multi-published author who lives a quiet life with the exception of the characters and stories roaming around in her head. She writes about sexy alpha heroes and used them to launch her very first series, Bad Boys in Big Trouble.

Next up, a new Sci-Fi contemporary romance series set in Arkansas. When she’s not curled on the sofa reading a great book or at the movie theater watching the latest action film, Fiona spends her time writing about the next bad boy (or bad boy alien) who needs his story told.

A hearty dose of laughter, each and every day, is required along with lots of coffee first thing in the morning as important parts of her routine.