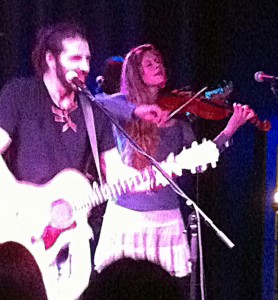 I have a huge girl crush on Corinna Smith. She’s incredibly talented, kind, a great teacher, and loves kids…and she’s gorgeous to boot! I admire this woman down to my toes–er–fins. Really…she’s just magic. (She’s even a mermaid. I swear!) And her birthday was July 5th — happy belated birthday, Corinna!

Corinna had her violin stolen shortly after she joined up with the Adam Ezra group, who launched a successful Indiegogo campaign to raise the funds to buy her another one. She plays like a dream and is a phenomenon on stage…you just have to see her to believe it.

So hie thee to an Adam Ezra Group concert if they happen to be playing in our area. In the meantime, feel free to friend Corinna on Facebook…and check out her awesome interview, right here, right now!

[Edited to say: I think I always knew making music was like writing…but I wasn’t quite sure JUST how much until I read Corinna’s answers here. See? Magic.–AK] 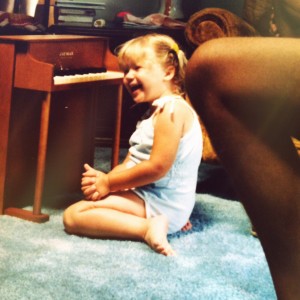 When did music first inspire you?
Music was always part of my life- my mom used to sing me lullabies, and I grew up listening to my dad play his guitar every evening as a way to relax. I got a toy piano for my 3rd birthday and used to “compose” songs for my stuffed animals, and began real piano lessons a few years later. But the first time I remember realizing I HAVE to play music was at an Alison Krauss and Union Station concert when I was 13. Her voice and her fiddle playing were so sweet but so powerful, and I wanted to be just like her.

How many instruments do you play?
That’s a tricky question- I studied music education in college, which means that technically I can play any instrument that’s found in schools… but I’m pretty sure nobody would be happy to hear me squawk away on the bassoon or pass out trying to play a note on the tuba!
Instruments I can actually play some songs on would be violin, viola, piano, guitar, mandolin, and banjo… and I sing a little, too.

What’s the most frustrating thing (for you) about your job being something you love?
I feel pretty lucky that I get to do the thing I love most in the world every single day, but because I am so passionate about it, I can also be very self-critical. Some days we’ll play a set where the humidity makes my violin lose tuning, or there are issues with our sound and I can’t hear my voice while singing, or I just space out for a second and make a really obvious mistake… there’s a little voice in my head that will say “see? you’re not good enough! you can’t do this!!” in those moments and I have to be careful not to let it take over my thoughts.

Conversely, what’s the most rewarding thing about your music?
There’s a moment in every live performance where I can feel everyone in the room connecting to the same energy. It’s my favorite thing about playing music for people, and the only way I can describe it is to say it’s magic. This can happen no matter where we are, how many people we’re playing for, how tired/hungry/cranky I might have been before the moment… It’s as if the entire outside world melts away and it’s just us being bathed in music. It’s such a crazy honor to get to help create that experience, and it still mystifies me every time it happens.

Tell us a little bit about writing your own music. Like…what comes first, the music or the lyrics?
For a long time, I wanted to write songs but was so paralyzed by that little “you’re not good enough” voice that I didn’t write at all. In the last few years, I’ve decided that for me, songwriting is not about writing something good or creating songs with any intention of sharing them… it’s just a personal form of expression, like keeping a journal. Once I made that distinction, I was able to let go and write, but I don’t really have a process… Sometimes it’s a phrase that sticks in my head, sometimes it’s a little fragment of melody, and sometimes it’s a chord progression I’ve heard elsewhere that I decide to steal for myself! The most important thing for me has been to withhold all judgment, be ok with writing “bad” songs, and use the whole process as a cathartic way to release whatever I’m feeling at the time.

You play primarily with the Adam Ezra Group — how do you collaborate with Adam and the rest of the group?
I’ve been with the Adam Ezra Group for about a year and a half, and although the songs start in Adam’s head, he is a really generous and collaborative artist, so everyone in the band has lots of room to contribute ideas when we’re working out a song. When Adam brings a new song to the band, we usually spend some time talking about it, listening to demo recordings he’ll make, and then devote a few rehearsals to experiment with it together. Sometimes we’ll do this with older songs of his too, which can give them a new life. My role as a fiddler/violinist is primarily to provide texture, and I’m often one of the last to create my parts because it allows me to find spaces within all the other layers of the song. 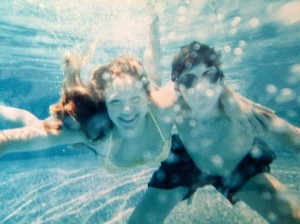 Corinna and her brother Brandon

How much are you on the road? What do you miss the most when you’re away from home?
We’re constantly on tour these days–over 200 shows a year, plus travel days to get to those shows–so our big messy van has kind of become my home at this point! I don’t really miss a particular place, but I do miss people. Most of my family is in Michigan and I don’t get to see them often… and my brother has an awesome band of his own called the Appleseed Collective… they tour all the time too, and it’s particularly hard to be away from him – he and I have been best friends our whole lives. We send handwritten letters to each other from the road, and we’re constantly scheming ways to get our two bands together (hint: it’s about to happen later this summer!!)

When you are on stage, you seem so lost in the music…and yet you still manage to engage not only the audience, but also each member of the band on stage (your enthusiasm is so contagious!). What I want to know is: What goes through your mind when you’re up there? How do you keep from losing the crowd, or the flow of the song?
That’s the magic feeling I mentioned! It’s such an amazing experience for me. I’m not sure there’s anything describable actually going through my mind… what I feel at those times are love, gratitude, and incredibly intense joy.

I’ve seen photos and articles about some of the teaching that you’ve done — can you tell us a little bit about that and why you do it?
Teaching is my other great love besides playing. I was so lucky growing up to have amazing teachers myself- my piano teacher, Carol Franklin, and my orchestra director, Bob Phillips, were two of the most influential people in my life. From the very first day, they each supported not only my budding musical skills, but encouraged me and made me believe that I had valid and important creative ideas–even as a beginning music student who could barely play her instruments. I think it’s vital that adults take children’s creative work seriously and see it as an expression that is just as honest and meaningful as a professional artist’s expression, even if the execution isn’t skilled yet. I’ve taught all ages from 2 1/2 years old to retired adults, spent some time teaching music in Singapore as well as lots of places in the U.S., worked with classes as big as 200, first-day beginning students, and even spent a few hours consulting with one of my classical music heroes who was a legendary performer but had never improvised… every single person I’ve ever taught or played music with has had beautiful, creative ideas. It fills me up and inspires me to be a part of that. Fortunately, teaching is a passion for Adam and the rest of my bandmates as well, and our nonprofit organization RallySound includes educational outreach in its mission, so I still get some opportunities to teach even while touring!! 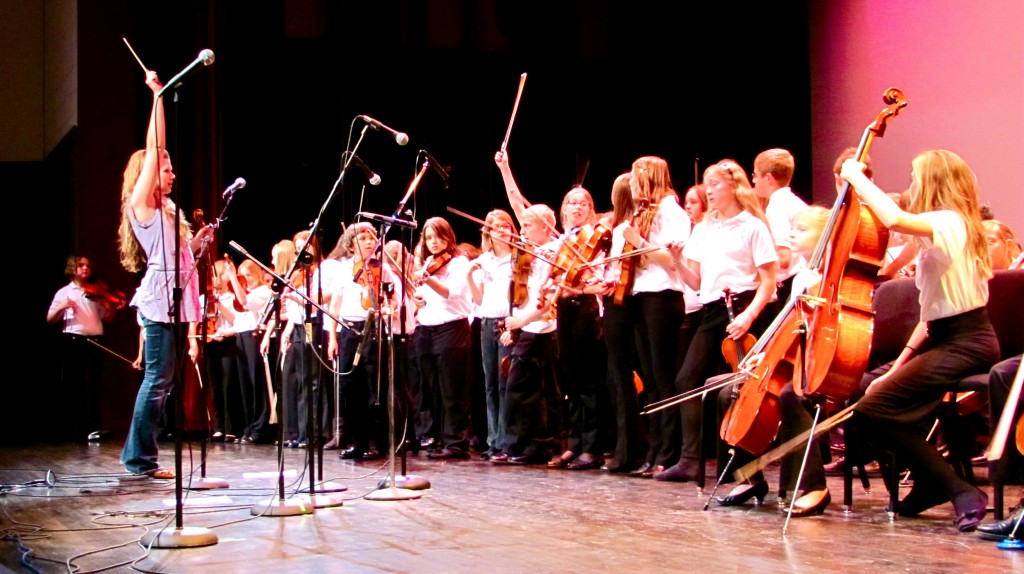 Oh my gosh…I could ask you so many more things…but this one I ask everyone: If you could have any superpower (or be any superhero) what/who would it be and why?
I sometimes have dreams where I’m not myself (I might be a child, or an animal… once, I dreamt I was the ocean!) and those are always fascinating to me. I think if I could have a superpower I would love to be able to experience life as other living things do. How cool would it be to become an elderly woman for a day, or an octopus, or a tree? And to be serious for just a moment, if such a superpower existed, and there was a way to make people live for a day in each other’s worlds, it might prevent a lot of the senseless violence caused by humans’ inability (or unwillingness) to see other perspectives…

What projects are you working on that fans can look forward to?
Right now my main project is playing shows every day with the Adam Ezra Group and being a part of the team, which takes a lot of behind-the-scenes work but is completely worth it. An event that AEG is hosting which I’m particularly excited about is our annual Ramble, which will be August 23 on Salisbury Beach in Massachusetts. It’s a festival put on by our nonprofit RallySound to support a really important cause, all while hanging out on a gorgeous beach all day sharing great music. Last year we raised enough funds to house 15 homeless veterans in New England, and this year we’ve partnered with some amazing, independently-owned farms to provide CSA shares of fresh, healthy produce to our veteran families on a weekly basis for a year! I’m also personally excited because my brother’s band is coming out to play at the Ramble, and my whole family is road-tripping to share the weekend with us… And of course, as a mermaid, I never turn down an opportunity to spend time at the beach! 🙂