Friends, I am absolutely thrilled to welcome Amy Patrick to the pond today. Her debut, CHANNEL 20 SOMETHING, released earlier this week. It’s such a fun read, and I gobbled it up in one sitting. But don’t take my recommendation alone! Here’s a blurb:

22-year-old Heidi Haynes is almost one year into her “real life”. She has her first reporting job and her first apartment, but she’s 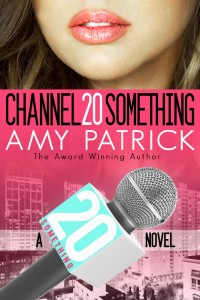 yet to experience first love. Yes, she’s in a comfortable relationship with her college sweetheart, and according to her friends and family, he’s perfect for her. But for some reason she’s not as eager to talk about walking down the aisle as he is.

And while Heidi’s doing what she wants to do, she’s not where she wants to be. She longs for big cities, big-market breaking news, and real independence from her way-too-close-by helicopter parents. Problem is, the last time she left the security of home for new places and new people, things didn’t go so well. Disastrously, in fact, and she came running back to a local college and a “safe” boyfriend.

Well-traveled Californian Aric Serrano plans to stay in small-market-Southern-Hell just long enough to grab a cup of coffee and put together a kick-ass “escape tape”. He’ll serve his one-year contract, then he’s taking off for a higher rung on the TV sports ladder—alone—the way he likes it. But when he walks into the newsroom and meets Heidi, he may have finally found something and someone worth committing to.

Heidi would be so much more comfortable if she could avoid her new co-worker—he’s just her type—the type she’s so careful to avoid. But that becomes impossible when she and Aric are forced to work together on the weekend news. Now there’s no denying the attraction between them, and she’ll have to decide between settling for the “good enough” life she already has or taking the risk of going for what she dreams of, an exciting career and a real love.

Pintip: Amy, thanks so much for being here! You are particularly qualified to write this story. Can you tell us a little about your background in journalism?

Amy: This series is so much fun to write, because I get to call upon so many great (and not-so-great) experiences from my 12 year career in TV news. During that time I was climbing the career ladder, moving frequently, working at 6 different stations in 4 different states. I met so many “characters” through the years, and naturally they influence my fictional characters and events. I still work for a Boston TV station as a station host, so the story ideas keep piling up!

Pintip: Well, your expertise certainly showed in this book! Tell us the truth: did any of these scenes, or a version of them, ever happen to you? Such as, ahem, stealing kisses in the edit bay? 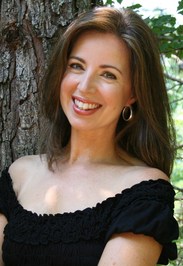 Amy: Hmmm. There was this one time… No actually I was not guilty of “fraternizing” during my first TV job, as Heidi and Aric are. But I was sorely tempted, because when I met my husband… he was the hot new sports guy. Unfortunately, the part about the nervous stomach and throwing up in front of the governor of Mississippi one minute before air time was also based on fact.

Pintip: Oooh. I didn’t know that was how you met your husband! How romantic! Or maybe I just think it’s romantic after reading your book, lol. What was your favorite scene to write?

Amy: I’m a sucker for first-kiss scenes, reading and writing them, so that was probably my favorite.

Pintip: What was the most difficult scene?

Amy: There were a couple scenes I cried through while writing, but I won’t tell you which ones– don’t want to ruin it for someone else.

Pintip: Good idea! We’ll see if the readers can figure it out once they get to those scenes. I adore your voice. Your heroine, Heidi, is utterly charming, and I love how she says, “Oh, sugar” when she curses. How did you come up with her character?

Amy: Oh, thank you! I’m so glad you found her charming– I can’t help but sympathize with her, because though she’s flawed, she tries so hard to please everyone (sometimes too hard), as many of us are apt to do in our early twenties. She’s a born and raised Southern girl, and there’s still a bit of a taboo about “ladies” cursing in the Deep South, thus the “sugar”. Also, Heidi has a really quirky boss who’s made public cursing, short skirts, and fraternizing grounds for firing at his TV station, so she has to be careful. She’s also living very close to her crazy-but-loving family, and struggling with being a daughter and sister to them while striving for real independence and trying to figure out who she really is. I started my first TV job at 21 years old, three weeks after graduation. So while I was a “professional” and a “grown-up” on TV, I was still very much developing as a person and sometimes felt like a kid faking my way through it all.

Pintip: Ha! I still feel like a kid faking my way through it all! You also write YA under the name Amy DeLuca. How is writing NA different from writing YA?

Amy: I’d say the voice is more mature, and the consequences of your character’s decisions are often more dire. By the time you’re out of college and starting life in the “real world”, you’re making decisions that can have lifelong repercussions, good or bad. And you’re making them with little (if any) influence from your parents. NA characters are in relationships that have a real chance of lasting forever, which is sometimes, but not often true of the relationships in YA books. Of course, everyone who marries their high school sweetheart and stays married for 60 years proves that wrong, but they may be the happy exception. My YA characters never even think about getting married, but I think twenty-somethings are much more likely to have that in their minds somewhere.

Pintip: So true. Lucky for us, we get to experience it all again by reading this book. And I hear there are going to be more books in the Channel 20 Something series. What’s coming up? Might these books involve Heidi’s friends, Mara and Kenley?

Amy: You guessed it! Book 2, STILL YOURS– A 20 SOMETHING NOVEL comes out in September and tells Mara’s story. She’s taken a new TV job in Providence, Rhode Island, the last place she wanted to work because it’s way to close to home and to him, the only guy who’s ever tempted her to abandon the Himbo-hunt and open herself up to actually loving someone.

And in October, Kenley’s story comes out. It’s called STILL ME- A 20 SOMETHING NOVEL. Kenley is reeling from a shocking change in her relationship status and regretting the day she ever left her on-air job for a man. Then she lands a new job at WNN in Atlanta and meets the network’s rising star, and even at the network level, what happens behind the scenes is the real story.

Pintip: Oh, wow! I can’t wait to read Mara’s and Kenley’s stories! I’ll be the first in line to purchase them. Thanks so much for being with us today, Amy!

Amy: Thank you for having me Pintip! It’s a thrill to be here with the Waterworld Mermaids today. And I’d love to give away a copy of the CHANNEL 20 SOMETHING e-book to one of the commenters. I’m curious to ask them: are there any moments from your own career that would make a great scene in a book?

Pintip: That’s a great question! Comment away, friends, and you’ll be entered to win this wonderful book!

Amy is a two-time Golden Heart finalist (2013 and 2014) who writes Young Adult fiction as Amy DeLuca and New Adult romance as Amy Patrick. She lives in Rhode Island with her husband and two sons and actually craves the heat and humidity of Mississippi, where she grew up. She’s been a professional singer and news anchor and currently narrates audio books as well as working as a station host for a Boston TV station.