“How long does it take to get published” is the title of fellow YA author Brigid Kemmerer’s blog post today. She makes some very good points and chats about her own story. (You should go read it…or at least click over to say hi.)

Like Brigid, I, too, get asked this question quite a lot.

There are too many places for an author to start.
For me, the START places are:

1.) When I was eight years old and announced to my parents that “If this acting thing doesn’t work out, I’ll just fall back on being a writer.” (1984)

2.) In college, when a bunch of my friends emailed around their answers to a personal profile questionnaire, and my answer to “What do you want to accomplish by the time you’re 30?” was “To be published.” (1994) 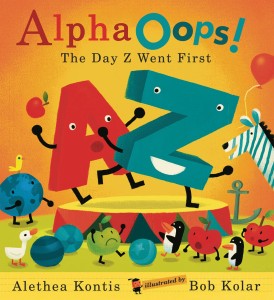 3.) When I started reviewing books for the local free press every two weeks (my paycheck was also free) (January 2003)

6.) When I got my first official book contract for AlphaOops!: The Day Z Went First

Based on this timeline, I usually pick 2003 as my START, since it’s obvious to me that’s when I decided to take writing seriously and devote major time and energy into pursuing it as a career. But I’d been faffing around writing and submitting stuff to the school literary anthology, the neighborhood newsletter, and magazine contests (never the school newspaper, though, and I have no idea why) since that first bullet point at 1995.

I’ve heard so many people say, “If you’re submitting, then you’re a writer!” If that’s true, then I’ve been a writer since I was eight.

Now we have to pick an ending!
Possible END dates for me:

1.) 2003 — when that book review column started running in The Rutherford Reader. (I held that position, unpaid, for two years. As long as I met my deadline, they put me in the paper.)

was actually in print

These END places work fine for me, but some people aren’t satisfied by this. Some would prefer the time I started writing the novel (Enchanted

) to the time it was published (2012) because picture books and anthologies and Dark-Hunter Companions don’t count. But then do I mark the start date from the time I wrote the original “Sunday” short story for the Codex Writers contest in 2005, or after that, when I decided to turn it into a novel? What about the novel I wrote in 2005 that’s still making the rounds and has yet to be picked up by an editor? Where does that fit in?

Obviously, the answer to “How long does it take to get published” varies by author. For me, it’s somewhere between 1 and 28 years.

MY question is: When people ask this, where are they starting from? At what point do they set their own personal timer? And who do they get to blame if the cake’s not finished when the buzzer sounds?

Given all these START and END points, what would you answer if you were me?