Fellow mermaid Robin Covington turned me on to Chuck Wendig. I fell in blog love at first sight. His blog, Terribleminds, is full of great advice for writers and some of the most entertaining Top 25 writing lists in the world. Double bonus, he’s foul-mouthed and funny. For me, anyone who drops an MF in a blog about writing and makes me laugh is a good egg. Yep, my kind of writer.

In addition, his latest novel, Blackbird, drops on April 24 and it looks awesome. 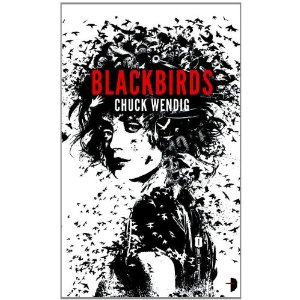 “Miriam Black knows when you will die.

Still in her early twenties, she’s foreseen hundreds of car crashes, heart attacks, strokes, suicides, and slow deaths by cancer. But when Miriam hitches a ride with truck driver Louis Darling and shakes his hand, she sees that in thirty days Louis will be gruesomely murdered while he calls her name.

Miriam has given up trying to save people; that only makes their deaths happen. But Louis will die because he met her, and she will be the next victim. No matter what she does she can’t save Louis. But if she wants to stay alive, she’ll have to try.” – Blackbird by Chuck Wendig

Recently, I e-mailed Chuck asking if he’d we willing to come swimming with the Waterworld Mermaids. Lucky for us, he pulled on a pair of swim trunks and a dove right in.

Welcome to the lagoon, let’s start off with a little background. Enlighten us on how you came to be a self-proclaimed pen monkey.

I rocketed to Earth in a space-pod as my Penmonkey home planet burned behind me.

No! Wait. I killed my Penmonkey father, ate his Wendigo heart, and absorbed his power!

Hrm. That’s not right, either.

Alas, my story is not nearly as fascinating as that. I wanted to become a writer. So I wrote. First short story published at age 18 and I’ve been writing professionally since then (to the point where I now write full-time).

Your top 25 lists are killer. How long does it take you to compose a list and what serves as your inspiration?

I generally compose the list itself – as in, the 25 items without descriptions – during the week, and then Sunday (the day in which I compose my crazy blog posts), I fill in the blanks. Then, when I’ve got enough lists, I compile them together in e-books (adding four or five brand new un-blogged lists to the book) and voila, all done.

The inspiration is frequently my own writing life. I look at things I need to say and use my blog as an avenue to say them. Terribleminds is really me talking to me more than it is me talking to you.

Any favorites from your top 25s?

I think anyone who reads the site knows I frequently recommend authors read their work aloud. In fact, I often threaten them with bodily harm if they don’t.

Those are my favorite ones — the ones where I get to threaten delicious violence upon them and their homes if they do not absorb my dubious “writer-think” into their brain-meats.

Do you ever read romance? If so, what type?

I’ve read some paranormal romance, sure.

What are the three most important things every romance writer should know about the inner workings of the male mind?

Oh, Sweet Jeebus, you’re making me the standard-bearer for the male-mind? Uh oh.

All right. Let’s try this.

First, we do think about sex as much as everyone says. Sometimes it’s sweet. Sometimes it’s weird. Sometimes it involves eye-popping debauchery that we could never say out loud. (“A cowgirl uniform, a birch tree, and a bucket of… fresh mulch?”)

Second, we think women are complicated. And we think we’re deliriously simple. But secretly we also know that we’re just as complicated as you, and further, we’re not all that different but we’ve all been taught how different we are and that’s our default way of thinking. In other words: we’re full of shit and most of the time we don’t realize it, so, uhh, sorry?

Third, we like romance just as much as you do, but somewhere along the way someone probably told us that it was weird and so we pretend we don’t. You merely need to remind us with examples.

Ever consider doing a top 25 for writing romance? What are a few things that would be on that list?

I don’t know that I’d be the guy to do it justice but I’d be willing to try. I think right now the only thing I can think of saying is that writing romance according to some rote recipe is not all that interesting (to write or to read). The romance genre tends to follow a pattern and patterns are predictable while romance most certainly is not. I’d suggest to keep it fresh, mix it up, change it, keep readers on their toes. It’s what I tried to do in Blackbirds, so, we’ll see how successful I was when the book drops on April 24th!

A huge thanks to Chuck for swimming with the mermaids, we hope to have you back in the lagoon again soon. If you can’t wait for more, swing on by my Avery Flynn blog for more of my interview with Chuck.