I am a comic book geek, dyed in the wool from the tender age when I could lift my first Archie Comics Digest. Casey and I loved Elfquest in middle school. I moved on to Arkham Asylum and the X-Men Phoenix Saga and John Byrne’s Next Men when I was a teen. In college, my boyfriend gave me a graphic novel by that guy Tori Amos was always writing into her songs–at my first Dragon*Con, Charles Vess drew the Sandman in silver paint pen inside my first edition hardcover of The Wake. It’s one of my most prized possessions.

I’ve been to comic book conventions before, spoken to artists and authors, found new things and scavenger hunted for signatures. But this past weekend at HeroesCon 2012 was my very first time BEHIND A TABLE.

I snuck into the comics industry through a hidden passage in the hedgerow. My collaborator on The Wonderland Alphabet: Alice’s Adventures Through the ABCs and What She Found There 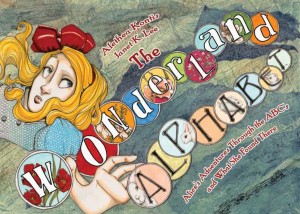 last week!) is the amazing artist Janet K. Lee. Janet and I have been friends for over a decade–we worked at the same book wholesaler in TN. I was the writer; she was the artist. I started out in magazines and picture books, she started selling in local art shows and galleries. I went on to get a novel published. Janet went on to win a Will Eisner Comic Industry Award for Return of the Dapper Men (written by Jim McCann, another friend who used to work at that same book wholesaler, coincidentally enough).

When the publisher of Dapper Men (Archaia Entertainment) asked Janet if she had any other projects lying fallow that they could publish while she and Jim worked on a sequel, Janet mentioned the ProtoPulp Art Show in which I had helped her create an Alice in Wonderland alphabet book…and the rest, as they say, is history.

Since Archaia is a publisher of fine comic books, I suddenly found myself stepping over the threshold of the comic book world. My official title is “creator.”

Talk about a dream come true.

Yes, comics is a whole other genre and therefore a whole other world, full of fabulously talented people and a boatload of new best friends to make. I was like a kid in a candy store.

Only, at HeroesCon, I had to work at the candy store. Here are some things I learned:

1.) The convention floor opens an hour before doors open to the public. Be there as early as you can. It may take you 5 minutes to set up your table, but before the doors open is the only time the other creators have to walk around and meet people and buy things. I signed a ton of books and prints, just while setting up.

2.) Artists like to support other artists, especially at HeroesCon. If you are a comic book geek, some creators will offer you a “trade” of your book for theirs (or a bunch of theirs). Ultimately, it’s all about loving what you’re doing and getting the word out to like-minded people. I didn’t get to walk the show floor much, but the couple of times I was offered a trade, I took it.

3.) You will get a MASSIVE thigh work out. This is not something I had anticipated. My feet hurting, sure–those floors are uncarpeted cement and very unforgiving. I am one of those people who stands when they talk to someone. I stood most of Friday. I sat a few times on Saturday when I got tired, or I needed to sign something, but I would pop right back up again when a new person walked by. All this up-down-up-down was the equivalent of eight straight hours of Catholic Mass. When I woke up Sunday morning to walk to the bathroom, I almost collapsed in pain.

4.) You will not eat. Or drink, much. As a Dragon*Con regular, I am never without a Powerbar and a bottle of water. Which is good, because we never got a break to leave the table. Ever. Once, the Fairy Godboyfriend brought me a leftover slice of pizza from his lunch. Once, Anya Martin from the Womanthology table brought me a frappuccino back from her Starbucks run. Once, on Saturday, during a lull, I went to the bathroom. I returned to find a line at the table and three items needing my signature immediately. 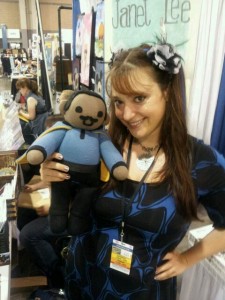 Janet never left the table the entire time. I told you–she’s amazing. Of course, she also does San Diego Comic Con every year, so she’s a seasoned pro. I’m still working up to that level of awesome.

Due to a work emergency of the Fairy Godboyfriend’s, I was whisked away early and forgot to say goodbye to a few people. I promise to make it up to them at Dragon*Con or Baltimore ComicCon, or New York ComicCon. If you’re going to be at any of those, please come find me and Janet in the Artist’s Alley!

In the meantime, I’m going to work on my novel…and read Princeless and Girls with Slingshots during the breaks. While curled up with my new Lando Calrissian plush.