Holy moly, my first manuscript. Wow. It was a total and complete mess. I don’t think it had even a semblance of a plot. Rather, it was just a bunch of rambling thoughts strung together. To tell you the truth, I can’t even tell you what the story was about. That’s how little of a plot it had! When people ask me how many books I’ve written, I don’t count this one. Just like I have my zero drafts (whose words don’t deserve the label of “first draft”), I also have a zero book.

Here’s what I can tell you:

The heroine’s name was Cat.

I wrote the manuscript in a coffee shop a couple blocks away from my apartment. Every day for six months, I went to the Xando and ordered an iced tea and wrote my heart out.

For the first time in my life, I was fully and irrevocably happy. I’ve dreamed of being a writer ever since I was six years old, and now, I was finally living it.

So, no matter what a complete and total disaster of a manuscript my first one was, I will always value it. For the very first time, the passion of my heart took root in something concrete, something that was outside of myself. And that, my dear fishy friends, is a beautiful and glorious thing. (No matter how crappy those words were!) 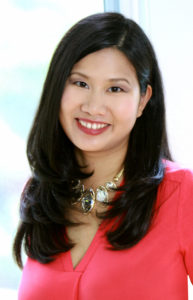 Pintip’s novel, FORGET TOMORROW, won the RWA RITA® for Best First Book. It is also a finalist for the Grand Prix de l’Imaginaire, the Japanese Sakura Medal, the MASL Truman Award, and the Tome Society It list. In addition, THE DARKEST LIE was nominated for a Romantic Times Reviewers’ Choice Award. Her other books include REMEMBER YESTERDAY, SEIZE TODAY, and GIRL ON THE VERGE.

She lives with her husband and children in Maryland. 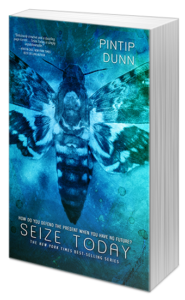 Seventeen-year-old Olivia Dresden is a precognitive. Since different versions of people’s futures flicker before her eyes, she doesn’t have to believe in human decency. She can see the way for everyone to be their best self-if only they would make the right decisions. No one is more conflicted than her mother, and Olivia can only watch as Chairwoman Dresden chooses the dark, destructive course every time. Yet Olivia remains fiercely loyal to the woman her mother could be.

But when the chairwoman captures Ryder Russell, the striking and strong-willed boy from the rebel Underground, Olivia sees a vision of her own imminent death…at Ryder’s hand. Despite her bleak fate, she rescues Ryder and flees with him, drawing her mother’s fury and sparking a romance as doomed as Olivia herself. As the full extent of Chairwoman Dresden’s gruesome plan is revealed, Olivia must find the courage to live in the present-and stop her mother before she destroys the world.