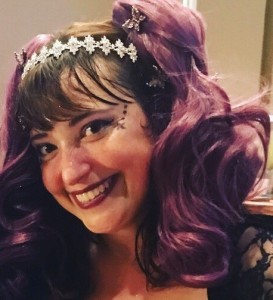 There are authors I know who would rather die than ever show their first attempt at a novel to the world.

I am not one of these authors.

In the Fall of 1987, my English teacher decided that she wanted our class to write in a journal every day.

I did not want her knowing anything personal about me, so I announced in my first entry that I would be writing an ongoing story for the duration of the class.

This teacher (whose name escapes me) cared far less about the assignment than I did. If she noticed the speed at which my writing improved and my journal entries lengthened, she never mentioned it. She did not care what I wrote (if she even read it)–it only mattered that there was a date listed beside every entry so she knew where to make her check mark. She never spoke to me about my broken idea of plagiarism, this fear of copying someone (in this case, Lois Duncan and HG Wells) that kept me from writing at full speed until many, many years later.

And yet, despite all that, I thank this teacher. Because, at the heart of it, and though it wasn’t her intent, she taught me how to write a novel. 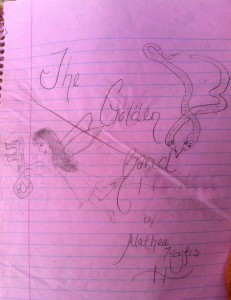 The Golden Band
Cover Illustration by Casey Cothran, circa 1988

I was eleven years old.

(Granted, I’d already been writing since the ripe old age of eight or so. I read every book I could get my hands on…and saw just about every film that came to my family’s movie theatre…so I had a pretty decent grasp on storytelling, if not proper manuscript formatting.)

In 2013, a fellow author introduced me to WattPad. This site seemed the perfect home for a project I’d had on the backburner for years: to post my original novel, in its original form, complete with Author’s Notes and Teacher’s Comments. (I’ve put those in the comments section below each chapter, for ease of reading.)

The Golden Band  is now published there in its original incarnation, as I wrote it in my journal in 1987. It’s entitled The Golden Band (7th Grade Edition).

The 7th Grade edition of this novel only runs through Chapter Seven — at that point, in the summer before 8th Grade, I decided I could go no further until I had fixed certain elements at the beginning of the story that just didn’t fit anymore.

Once I fully entered the 7th Grade Edition, I started posting the new edition: The Golden Band (High School Edition).

Transcribing this latter version got me through my little sister’s spinal surgery a few years ago — I couldn’t concentrate enough in the waiting room to write new fiction, so I set to work on this. However, she came through with flying colors and the project fell by the wayside. Now I just need someone to come over to the house and help finish transcribing it for me!

2 thoughts on “My First Novel, by Alethea Kontis”