Today, I am thrilled to welcome debut author and good friend, Pat Esden, to the pond. Her wonderful NA, A HOLD ON ME, which I had the distinct honor of reading releases into the world on February 23.
In the meantime, Pat is joining us to answer our mermaid prompt of the month:

Pick one thing in your house/apartment/writing space and discuss its history and what it means to you and how it is “Quintessentially You”?

Take it away, Pat!

I’m a collector and antique dealer and my house is filled with keepsakes, so picking one thing that quintessentially represents me wasn’t easy. I decided on a dollhouse that my oldest sister’s first husband built for me. It was made it: the likeness of my family’s camp where I spent a large part of my childhood. 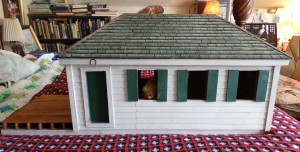 Camp was a place where I daydreamed and playacted, heard stories around campfires, and discovered creepy old fairytales in tattered schoolbooks. The dollhouse itself also played a role in my imaginings—as did the troll who’s looking out the window. 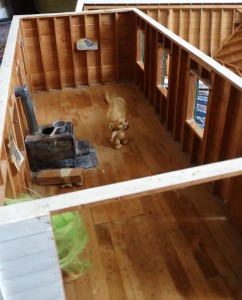 This photo is of five-year-old me standing in the doorway of the camp.

This is my dad and I carrying supplies into the camp. 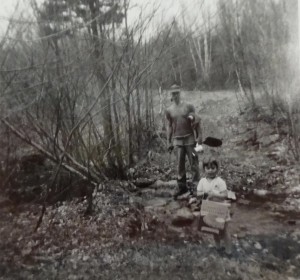 BLURB for A HOLD ON ME:

She never wanted to return.
He wants nothing more than for her to leave.
But the fire between them is as strong as the past that haunts them. 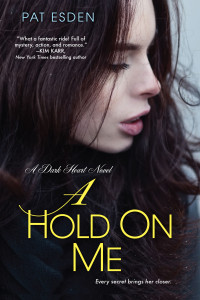 Annie Freemont grew up on the road, immersed in the romance of rare things, cultivating an eye for artifacts and a spirit for bargaining. It’s a freewheeling life she loves and plans to continue—until her dad is diagnosed with dementia. His illness forces them to return to Moonhill, their ancestral home on the coast of Maine—and to the family they left behind fifteen years ago, after Annie’s mother died in a suspicious accident.

Once at Moonhill, Annie is shocked when her aunt separates her from her father. The next time Annie sees him, he’s a bizarre, violent shadow of his former self. Confused, she turns to an unlikely ally for support—Chase, the dangerously seductive young groundskeeper. With his dark good looks and powerful presence, Chase has an air of mystery that Annie is irresistibly drawn to. But she also senses that behind his penetrating eyes are secrets she can’t even begin to imagine. Secrets that hold the key to the past, to Annie’s own longings—and to all of their futures. Now, to unlock them, she’ll have to face her greatest fears and embrace her legacy…

PAT ESDEN is an antique-dealing florist by trade. She’s also a member of Science Fiction & Fantasy Writers of America, Romance Writers of America, and the League of Vermont Writers. Her short stories have appeared in a number of publications, including Orson Scott Card’s Intergalactic Medicine Show, the Mythopoeic Society’s Mythic Circle literary magazine, and George H. Scither’s anthology Cat Tales.

2 thoughts on “Quintessentially Me: Pat Esden”