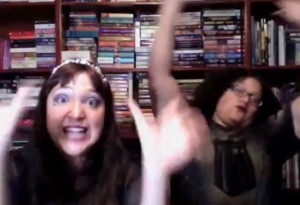 Alethea Mermaid here, swimming today with my first ever Writer-in-Residence at my Florida Oasis: K. Tempest Bradford! In addition to writing fiction, Tempest also writes reviews, articles, and opinion pieces for various magazines, both online and in print. One of her recent pieces for xojane challenged readers to broaden their reading horizons. A worthwhile challenge, n’est-ce pas? Except for one teeny tiny little detail…

Tempest’s article, with its clickbait title and similar photo, pretty much blew up the internet. Seriously. Be careful if you go read that original post. There are over 2500 comments–most posted within the first 72 hours–and the majority of them are not kind. Beyond that, Tempest was called names and threatened for even daring to suggest this challenge. A #lovetweetsfortempest movement was started to counteract some of the hate. The vileness spilled over into her other social media. The post went viral on Tumblr and was picked up by Time magazine. Over a month later, she’s still feeling the backlash from this.

And I witnessed all of it.

We were having a write-in day with Leanna Renee Hieber and Tempest’s editor Marianne. We were all sitting on the porch when Tempest finished the article and pitched her title to Marianne.

“Make it first person,” said Marianne. “I want YOU to challenge people to do this.”

So it was done. Tempest made $50 for the article, the same thing she makes for all the articles she writes, and went on to work on developing her next piece…while the internet went to Crazytown. Who knows how many thousands of advertiser dollars she raked in for the various affiliates who picked up her news and republished it. I think of the personal trauma she went through…and to some small extent is still going through…all for a measly $50.

Leanna and I watched Tempest closely over the next few days. She got quiet and retreated into the computer. (On an average day, Tempest plays music, dances, and sings at the top of her lungs.) We poked her every so often to make sure she was okay–and she promised she was–but we didn’t believe her. We knew some of the things that were being said about her. We went out to dinner and took her phone away, so that we could all have a break from the poison. Because our dear Tempest is a fighter…and standing up against all that bile can be addictive. We are taught to fight the good fight–but at what cost?

We’ve all read the articles on cyberbullying. It’s happened to many of us. But to be present from start to finish while you watch it happening to someone else…someone that you love…wow. You realize the horrible lengths to which people will go to wish ill (and even harm) to someone they don’t even know.

I am so glad Tempest was here when all this went down. I’m glad she wasn’t alone. Yes, sometimes the world needs to be shaken up a little bit. Sometimes we are the ones to do the shaking. But knowing you’re not alone and physically being alone are two very separate things.

I asked Tempest to join me here at the lagoon for a very special interview, in which she challenges romance readers (who often have no trouble not reading books by men) to broaden our own horizons.

So…what reading ruts do you find yourself getting into?

What books can you recommend that might broaden our literary horizons? I’d love to hear them!

(also, if you’re on Tumblr, you’ll want to reblog this bit Tempest just posted as a teaser for her video series, because it’s hilarious and brilliant.)