I have never been one to write ‘short’… that’s for sure. Just ask anyone who receives a letter or message from me, four page letters and full detail messages. I get irate when my children respond to my texts with ‘K’ and ‘Yes/No’.  I want details, people! I had a love/hate relationships with my English teachers in high school. Only 10 page report on the British Monarchy? *sigh* Yes, I was one of those, nerds/geeks.

So when an issue came up with my work in progress, Immortal Angel, in which I needed to introduce the couple’s situation before the actual story took place I came up with a ‘novella’ to do just that.

Some would say it’s more of a novelette since it’s roughly a 16,000 word little piece of work. But God, did I have a blast writing it!

Now I want to do more…but after I finish Immortal Angel, now.

So without further ado, I would like to present my little story which is now out on Kindle, Nook, Kobo and a few other sites provided by the wonderful people at Draft2Digital. 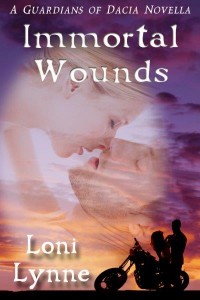 (A Guardians of Dacia Novella)

Ain’t No Sunshine When She’s Gone…

Vietnam never stopped for Mike Linder—and it never will. As an immortal being, Mike is    doomed to face his issues of Post-Traumatic Stress Disorder he suffered in combat for  eternity. The darkness in the seventy year old vampire is swept away by the sweet spirited  Christina Johnston who he is called upon by his boss to protect from clan enemies. But  keeping his sunshine around would only lead to extinguishing her light, permanently.

Tina Johnston always believes the glass is half full. The eternal optimist, she wants to help  Mike find the peace from his horrors of war and she believes she’s the one to give it to him.  Unfortunately, Mike won’t let her. Haunted by his past and suffering terrors mixed with his  present, is she strong enough to endure his tortured past? Can she heal his Immortal Wounds?

Available only on eBook format at these fine stores, for only .99:

I hope you enjoy!