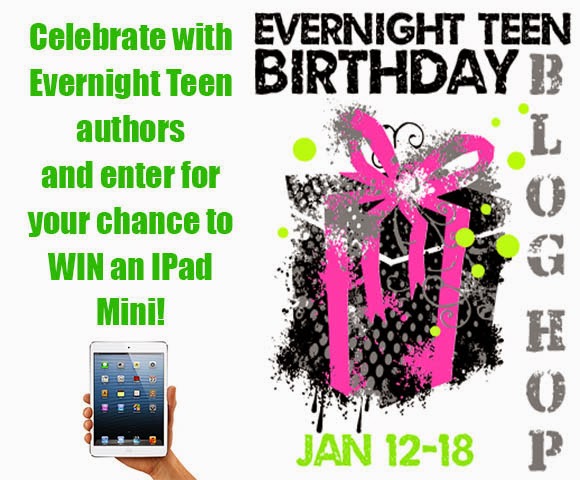 The Waterworld Mermaids lost several posts from the past two weeks, including our original posting for the fabulous Evernight Teen Birthday Blog Hop. Unfortunately, all record of the wonderful comments left on that original post were also lost. If you commented then, please comment again here. And if you are visiting the hop for the first time, please comment as well! The mermaids are keeping a handwritten record this time, just in case the mysterious ghost of the lagoon strikes again. We want your comments counted toward the awesome prizes being offered and we want you to know all about the awesome book by Melissa Frost being spotlighted here in the pond! Thank you for your patience. Fishy kisses, xoxoxo.

EVERNIGHT TEEN turns two this month and we’re having a huge party to celebrate! It may be EVERNIGHT TEEN’s birthday, but you get the presents. So, grab a piece of cake, hop from blog-to-blog and discover EVERNIGHT TEEN!

Be sure to visit every stop on the hop and answer each question. The more blogs you hop, the more chances to win the GRAND PRIZE of an iPad Mini sponsored by EVERNIGHT TEEN (one entry per blog). Plus, hop each blog for a host of other fabulous prizes. The Waterworld Mermaids are offering a $10 Evernight Teen Gift Card.

Have your TBR list handy because we have lots of new titles for you to add, including this wonderful featured book by Melissa Frost… 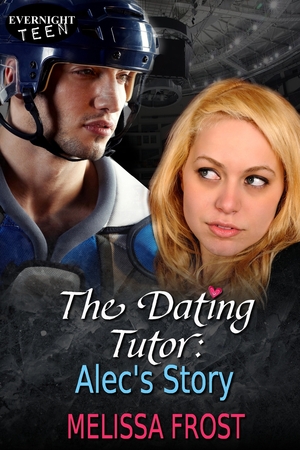 Mermaids, thank you so much for hosting me during the Evernight Teen blog hop. I’d like to share a little bit about the Dating Tutor series for any readers who might be unfamiliar with it. The series follows a group of friends who each have their own issues with dating – Ellie’s extremely shy, Matt’s a player, and Sasha’s been jilted by a past relationship. With the meddling help of their friend Alec (the dating tutor), these friends find themselves in ridiculous situations, facing impossible challenges, and participating in a few hockey fights as well.  This sports related series adds in the thrill of high impact hockey to the topsy-turvy world of teenaged dating.

Here is a little bit about the second book in the series – The Dating Tutor: Alec’s Story

Alec Horner’s life was never simple. Between dealing with an alcoholic father and worrying about the continuation of his education, he has more than a few concerns. The complications continue to mount when his neighbor and best friend, Ellie Harper, asks him to tutor her in the art of dating.

The alternately humorous and frustrating task takes a new turn when Alec realizes his feelings for the girl next door suddenly expand beyond that of a mere friend. Coaching her is a torturous delight. He wants her and revels in each moment, yet he knows her efforts are aimed toward the goal of seducing another boy. Can this gruff hockey player convince his sweet and innocent best friend that the two of them might have a future together?

Alec walked Ellie to her front door with his arm held out so she could keep hers tucked into it. She was strolling along perfectly at ease, as if she had no idea just how much this little date of theirs had thrown him.

“This actually was a really fun night,” she proclaimed, sounding almost reluctant to admit that. “I had my doubts, but date Alec is actually an okay guy.”

“You had doubts?” He kept his tone light and playful as he led her up the front walk. “You should have known I’m quite the catch way before now. I don’t know why it took you so long to figure it out.”

She shrugged a shoulder. “Oh, I don’t know. Could it be the usual behavior I see from you?” She poked him accusingly in the ribs. “Spraying me with your garden hose, burping, leaving your dirty gym shorts on your bedroom floor for weeks on end, and the many other boy faux pas you commit.”

He was suddenly regretting all those boyish traits he’d allowed her to witness. He’d never thought he would regard her in a romantic fashion. She’d been like one of the guys. Now it was costing him. He doubted Jake had ever let a girl hear him burp before. In fact, he wondered if Jake ever had burped before at all. “Dating Alec and hanging out at home Alec are like two different men.” He winked, trying to make light of it. “You’re one of the rare people who has ever gotten to see both sides of the coin. In fact, you might be the only one.”

She nodded with an affectionate smile. “No one knows you like I do.”

“No one,” he agreed. That statement was his undoing. Her words rang entirely true. No one knew him like she did, and he doubted anyone ever would. Not some hockey groupie. Not girls like Shannon.

Her mouth opened as if to ask what he was doing, but he didn’t give her the chance to voice her confusion. He cupped her face in his hands and brought his lips to hers.

Unlike everything else throughout the entire night, Ellie didn’t fight the kiss. She didn’t gasp or protest or inquire into his motives. She simply melted against him with a content sound in the back of her throat.

Her lips were soft and warm. They brushed along his as if pleading for more. Alec obliged. Brushing her hair back from her face, he deepened the kiss and stepped in closer to her. He could feel the soft curves of her body against the front of him; they tantalized him with the promise of more.

Almost frenzied from her responsiveness, Alec nudged her mouth open. He could taste the raspberries from the juice on her lips, and he once again congratulated himself on a wise choice over the course of the evening. His tongue darted out for another taste, running along her bottom lip.

When she pressed herself even closer to him, Alec pulled back very suddenly. He grasped that he’d just completely crossed the line of friendship. What had transpired between them would be seared into his brain for the rest of eternity.

But he had to play it off. She had a date with someone else. If she reciprocated his feelings at all, it would be up to her to make the move. He wouldn’t break up a budding relationship because of his own selfish feelings. She’d waited seventeen years for her dream date to come along. He wasn’t going to ruin that fairytale for her. He took a few steps backward with an amused chuckle. “Very good. Do that Saturday and Jake will be putty.” He shoved his hands deep into the pockets of his slacks and bobbed his head in farewell. “I’ll see you Monday for the game?”

Silence stretched between them before she finally bobbed her head in an awkward response. “Y…yeah. I’ll see you Monday.”

“See ya Monday.” With that, he turned and walked away. Though his home was no more than thirty strides away, they were the hardest steps of his life.

Enter for a chance to win EVERNIGHT TEEN’s GRAND PRIZE of an iPad Mini and our blog prize of a $10 Evernight Teen Gift Card by answering this question (be sure to include your email address to be eligible to win):