Ever feel guilty about something that gave you great pleasure?

There are so many days in which we give to others that when we take time to do something we want to do, we feel guilty–or at least I do. A perfect example was last week:

My mom recently moved back into the home she was raised in up in Northern Michigan and I went up to see her for a week along with my youngest daughter. We drove twelve hours from Western Maryland to Northern Michigan and had a great time, just the two of us. It was our first ‘mother/daughter’ trip.

Now originally we were going up to help my mother paint and unpack but it ended up becoming a vacation of sorts. My sister who lives up there, near my mom, came over for the week. We spent days traveling to the towns I’d lived in when I was younger, out to my grandparents property, and up to see the sights at Mackinaw Island, Sleeping Bear Dunes and Grand Traverse Light House. 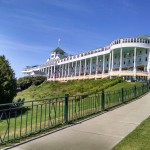 I did manage to put together most of my mother’s library (5 huge bookshelves in one bedroom) but there are still boxes of books (I get my love of literature from her). Still, part of me feels guilty that I was only able to do that much.

When I returned home, part of me felt guilty for spending money on my trip when it could have gone to something else and then I stopped… 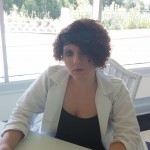 My baby girl sitting in The Grand Hotel

Why should I feel guilty about enjoying myself with my family? I splurged so my daughter and I could tour the Grand Hotel on Mackinaw Island–something I’d never been able to do when I was younger. But now I’ve been inside, took pictures, sat in the white rocking chairs on the worlds longest porch with my daughter and gazed out over the Straits of Mackinaw (where Lake Michigan and Lake Huron come together and the Mackinac Bridge rises in the distance to the right and Round Island Lighthouse is seated to the left).

The day couldn’t have been more beautiful. Daughter and I even braved the trek up Sleeping Bear Dunes, that week, (while my mother and sister opted not to–chickens! LOL!) to see if we could view Lake Michigan on the other side. We traversed up the main dune and over a few more, but when other visitors told us there were still a few more dunes to trek we decided to head back down as it was getting late and we were exhausted. Still we had a blast, worked up an appetite and slept so well that night! 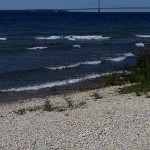 The Mackinac Bridge and the Straits of Mackinaw

So when I questioned my spending habits I tallied up the cost (which wasn’t a whole lot but I could’ve saved it for other things), and then tallied up the memories that were made…Priceless!!

What have you done for ‘guilty pleasures’? 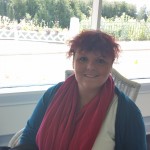