Some of my mermaid friends know that my daughter returned to the nest two years ago. She made a brave decision, and walked away from an abusive and failing marriage.

She’s made a lot of progress since that sad day, but one thing hasn’t changed. Obsessive-compulsive living. I know, because I have it, too.

This condition, often dormant (or so we tell ourselves) has most recently emerged, yet again, as the two of us teamed up to redecorate our home’s main bathroom. The lavender color it sported for two years, on which we agreed only after hours-long discussions, was voted out. Unbeautiful, it lay on the walls with a sort of hyper-polite, John Gielgud air. Trust me, there ain’t no joyful living with a slightly grape-griege wall surface tapping on your brain in the morning as a person brushes her teeth. 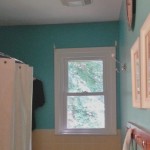 She settled on a vibrant teal (inspired by a clock, but that’s another story). It’s very kick-ass.  Then, she wanted a new shower curtain. And wouldn’t it be nice to replace the laundry baskets with a woven hamper? How about a curved shower rod? New wastebasket? And oh, yeah, that cute crocheted toilet paper caddy, Mom, that you made during the blizzard when the lights were out for thirteen hours? It has to go.

And on and on. I fear, at the moment, the decorating vibe is waning, however. Twenty minutes remains to paint the window woodwork. Another thirty is needed to mount the new blind. I see no movement recently.

That’s okay, because I also decided the master bathroom could use some updating.

I’ve bought five shower curtains and returned four. Two bath rugs bought, one remains. Ditto the trash can. Just one new shower rod and rings. By sheer good luck, I happened on a yard sale and found a framed poster that will replace the current artwork. 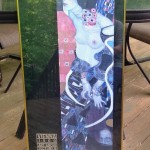 As a last salute to the OCD urge, I mounted the latest (and last!) shower curtain this morning, pleated the header into a neat bundle and dosed the knife edges with a nice shot of spray starch.  OCD, some?  Yeah, buddy. 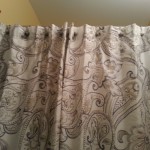 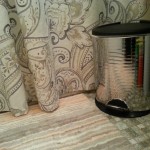 My bathroom is done.  I refuse to worry about the Daughter’s.  It’s all good, you know, to let a thirty-year old claim her project. It has me wondering, though, as I trot here and there, both buying and returning:

Well, it’s not. If it were writing, I’d be doing the BICHOK thing, spinning out words (like now, and on deadline, too).

However, the back and forth of choosing, modifying, changing course, writing, rewriting, sticking to a program to create the best bathroom book possible?

Share with me, if you dare, your obsessive-compulsive moments with decorating  writing.  Maybe there’s a pattern! 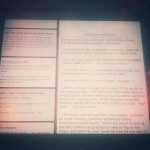 8 thoughts on “Living the Sorta-OCD Life”