As authors and/or readers of romance, we are passionate about the characters. We love our heroines, but the hero–well, we can get obsessed. They are strong, captivating, bad boys, decent men, with honor, revenge, loyalty or redemption top of mind. We want them silent and brave, sexy and broad-shouldered (a six pack can add to the love), but willing to do whatever they must do (once they’ve put aside that pesky character flaw) to be the man they were always meant to me (for that one special woman!). Yep. We love to write them and to read them. And we are fans.

But let’s talk about the extremes of fandom for a moment (since I understand extreme fandom better than most:)… 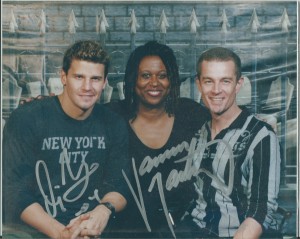 Back in the day, I fell for a show called Buffy the Vampire Slayer, and yes, around the Internet lately, I’ve been talking about my Whedon obsession. And yes, I know NOT a book, but a TV show that wrote characters as if they were in a book (IMHO). I traveled far and wide to have moments with my TV boyfriends. The photo here was taken at an event in London a few years ago. And yes, I was a happy girl that day:)! I was sandwiched between (and oh, how I wish:) David Boreanaz (Angel) and James Marsters (Spike).

My other TV boyfriend is truly my boyfriend although a few authors (Avery Flynn, Robin Covington, Tracy Brogan, and Michelle Monkou) have been tricked into thinking he belongs to them, or should be shared equally among his fans, or some rot. But Dean Winchester aka Jensen Ackles is MINE. 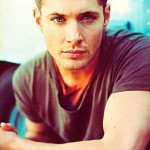 I have had many TV boyfriends, and have fallen for many a book boyfriend, but right now, I have fallen hard, and forever, for a man named Jamie.

Yes. I’m nearly two decades behind on reading the books – but OMG, I’m in it now and OUTLANDER is heaven. And Jamie is the pearly gates (prize at the end of the rainbow and everything else you can throw into the pot – he’s it!). And dang STARZ for producing the TV series starring a man who embodies Jamie in my mind, or at least who looks the part:)… 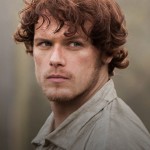 I am seriously thinking about heading across the pond to wherever they are filming OUTLANDER and vacationing (for a few dozen weeks). And do they have fan events like Outlander-Con? If they do, I also in!

So question of the day, name your latest book boyfriend or TV show boyfriend, and have you ever gone as far as London to meet them in person (me and the Buffy boys for example:), or fought with friends over pillowcases with their images on them (Tracy, Michelle, Robin, Avery, you know who you are!). How badly have you fan-girled an author? – The adjustment from normal to fangirl is a thin line…and slipping over the edge could be, you know, embarrassing!   (Remember  the root of the word fan – is fanatic:)…Full disclosure, please!

24 thoughts on “Book or TV Boyfriend: How Far Would You Go?”