Doing makeup on a group of male teachers – peers – who’ve never been in a theater production is a test of character.  The poor devil who gets his first “makeover” is in for a big surprise.  For me, a theater major and makeup artist for school plays in past years, it’s routine.

Over and over, they insisted the idea was outrageous.  Up to the point of hearing they would be on the receiving end of a foundation-laden sponge, they were thrilled with the idea of being in a play.  Memorize lines?  Check.  Stage direction?  Check.  Costumes?  Definitely check.  Costumes are fun! We get to pretend! We’re gonna be somebody else for an hour and fool our students into believing in our make believe for the afternoon!

Makeup?  Whoa.  No.  Not me.  You’re not doing this.  I am offended!  How could you tamper with this perfection?

You better not make me look like a girl!

There were four Seniors in the cast, all veterans of high school productions.  They were the pros.  They understood.  They didn’t fight.  They threw themselves in the chair and got made up with not a whimper.  NOT ONE.

The grownups?  Oh, the bitching. The moaning.  The absurd SHOCK when they saw their reflection after ten minutes in my hands.

Foundation, powder, eyeshadow, blush. Lots of foundation, across the face, over the ears, down the neck, even on the head (many of them are going bald and the glow from their domes is… not attractive onstage).

requiring makeup on all sides. $$$

The final hurdle for every one of the men was the lipstick.  I had to touch their mouths with color – brilliant, extreme color.  It is an intimate, threatening part of the ritual, probably the hardest moment of the makeup routine, and absolutely necessary.  Only then would they be allowed to look at themselves in the mirror.

After the first “client” had done the walk of shame (“you look like a girl!”) the others knew what had to be done.

And I realized – this is writing.  All the preparation, the denial, the angst, the sheer terror of putting yourself “out there” and allowing others to see you and your work, is part of the writer’s job.

Man up.  Pull up your big girl panties.  Get a grip.  Stop with the whining already. But remember – it’s better with lipstick. 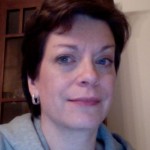 10 thoughts on “Susan Mermaid Does Makeup”