Today, the Mermaid Lagoon is proud to host the fabulous Sandra Tayler!

I had the honor of being a backer of Sandra’s Kickstarter campaign for her second picture book, The Strength of Wild Horses. I asked Sandra if she might stop by and share a little bit about her experiences, both as a writer of books for headstrong young girls, and as the proud owner of a successfully funded Kickstarter campaign.

Take it away, Sandra!

* What inspired you to write picture books?

My daughter was in the middle of a particularly difficult kindergarten year. It was the kind of year that has visits to the principals office and lots of conferences with teachers. Through it I watched my daughter start coming to the conclusion that she was a bad person because she was always in trouble. I knew she needed a story that let her see that ideas are separate from ourselves and that they can be steered in good ways or bad. I couldn’t find that story, so I wrote Hold on to Your Horses. My latest book The Strength of Wild Horses elaborates on the ideas and characters in the first story.

* What age group are your books for? Who is your target audience?

I think the sweet spot for enjoying these picture books is children ages 4-8 and their parents, but I’ve heard of much younger people enjoying them and much older people too. They’re for anyone who is bursting with creative ideas. 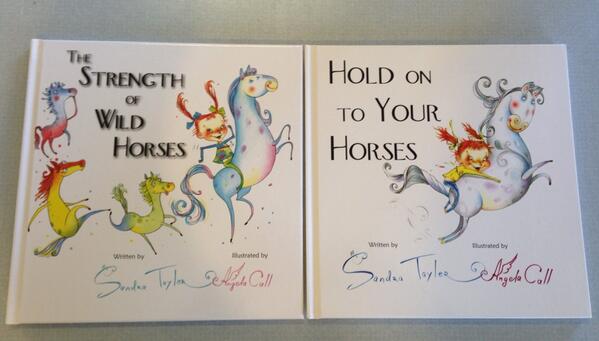 * Tell us a little bit about Amy and the importance of horses!

Strength of Wild Horses begins with the line “Amy was a girl with ideas like wild horses” and I think that really summarizes her well. She is bursting with energy and creativity. Those things combine in ways that get her into a lot of trouble, but by imagining her ideas as horses, Amy learns that she can steer them. Then in Strength of Wild Horses she sees that creative ideas can rescue other people.

* Be honest, how scary was it to launch a Kickstarter?

Terrifying. I did not want to do it. Hold on to Your Horses came out before Kickstarter existed and I kind of wanted to do the same thing again, but it meant coming up with all the money for printing ourselves. I’d have done that if I had to, but there is real power in Kickstarter. I’d seen how it works and I knew that the best promotional push I could give Strength of Wild Horses was to run a Kickstarter project to fund it. I’m so glad I did. Setting it up and running it was lots of work, but I was overwhelmed by the kindness of my backers and friends. They really came out to support the book and show me I was creating something that others cared about as well as me.

* How did you feel once you hit that goal? Was the pressure better or worse?

My project was timed a little bit strangely. The last week of the funding drive began on Thanksgiving weekend, which is not an ideal time to run an internet promotion. People are off with their families or shopping. We hit the funding goal on the Saturday of Thanksgiving weekend with five days to go. With so few days left, I knew we weren’t likely to hit the sort of stretch goal that would fund a second book, which left me with small stretch goals that weren’t particularly compelling. It felt like the pressure was off. The world was distracted by the holidays and the Kickstarter didn’t get a huge rush at the end as many projects do. I was just really glad I’d get to do the book.

* How did you find your illustrator?

When I was seeking an artist for the first book, we put out the word to my husband’s readers. He does a daily webcomic and has pretty good internet reach. Angela’s husband saw the call and encouraged Angela to submit. I’m so happy she did. Her art is perfect for these stories and truly beautiful.

* Will The Strength of Wild Horses be made available to non-Kickstarter folks?

Yes. It’s available now through our online store
Or through Amazon.com

I’m working on some books of essays, and a middle-grade novel. After that there are at least two more picture books pinging around in my brain. You can keep up with all my thoughts an work by following my blog One Cobble at a Time, or by signing up for my mailing list!

Sandra Tayler began writing her first story at the age of 6. It wasn’t a good story, but she loved it. She continued to love writing stories all the way through high school despite scattered encouragements and discouragements along the way. At the age of 20 Sandra met and married Howard Tayler who at that time was a musician. Together they had 4 children, 2 houses, and one failed record production business. Somewhere along the line Howard realized that he really wanted to be a cartoonist and Sandra realized that she wanted to start writing again. Now Sandra spends her time as the distribution half of the Schlock Mercenary comic business, a mother of four kids, and in the spaces between everything else she writes. Her other work can be found at http://sandra.tayler.com.