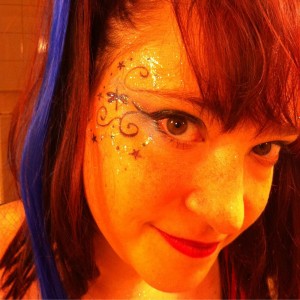 Today is my absolute favorite holiday, and it’s all because of a book. Before Harry Potter was a glimmer in Jo Rowling’s eye, there was a little book called Witch Week by Diana Wynne Jones. It remains one of my favorite books to this day. One day I will be in England for Bonfire Night.

At the beginning of Witch Week, teacher Mr. Crossley discovers a note that says, “Someone in this class is a witch.” Are they? Are they not? Is it a bad thing to be a witch? A good thing? And what does this all have to do with Guy Fawkes?

No spoilers — you’ll have to read the book. But I will say, after finishing Witch Week, I wanted to be a witch more than anything.

I’ve always felt like an outcast, so I’ve always been drawn to them. It may be a fine thing to dance to the beat of one’s own drum…but the truth is, the rest of the world doesn’t quite know what to do with you. They see you dancing, but they don’t hear the music, and that upsets them. People like things to be simple, so that they can mentally file them into boxes.

I used to joke that I was so far outside The Box that I used The Box as an ashtray.

I graduated high school in 1993. While the rest of my peers were dreaming of becoming doctors and lawyers and teachers, I wanted to be Neil Gaiman. He didn’t have quite the celebrity status then that he has now, but he was still a

rock star in the Hyper-Intelligent Closet-Goth Geek Girl circles. In his Sandman comics, he dreamt up characters that I saw when I peered through my Looking-Glass–people I was, at the time, too afraid to be.

My favorite of the Sandman series was the graphic novel A Game of You, with its complicated heroine (Barbie) running around a Wonderlandish fantasy half-life. In fantasy land, Barbie was a princess. In real life, Barbie was a bit of a mess…who often painted her face.

I may have majored in Chemistry, but I knew the life I wanted: to spend a good portion of my waking hours in costume, living in fantasy worlds, and painting my face. The whole “Princess” appellation didn’t happen until many years later, an amusing coincidence I embraced and ran with because I could.

Not that any of this ever stopped me from trying to fit in. I had friends in the Horror Writers Association, but that wasn’t me. I grew up in science fiction & fantasy, but the SFWA folks tolerate me like tired parents tolerating a dramatic teenager. Every time I’m booked at a SFWA event, the booksellers gently ignore the fact that I’ve written picture books. Same with RWA. Every time I show up at an SCBWI event (children’s books), I’m asked if I’m an illustrator based on my appearance.

Across the board, a dizzying amount of people assume I’m self-published.

The one time truly felt like I fit in, with no explanation needed, was at Heather Brewer’s Less Than Three anti-bullying conference in Missouri. I was surrounded by YA authors who hugged me and told me how much they appreciated my bright light. (Ironically, there is no official national association for YA authors. I’m kind of glad…because they’d probably start by finding a way to kick me out.) 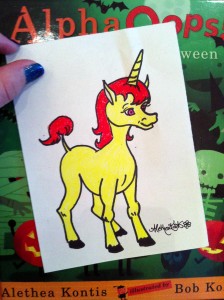 I also feel at home at comic book conventions…though as a writer I have to shoehorn my way into them, usually on Janet Lee‘s coattails. My style of dress is referred to as “cosplay”–even though I’m not “playing” anyone but myself–and the other artists in the room are more supportive of each other than any genre I’ve seen.

I don’t get invited to panels at these conventions, since I haven’t formally written a serialized comic for a major publisher. (Yet.) Mostly, I just sit at a table with Janet and talk with other fans about geeky stuff. WHICH IS AWESOME. I do get jealous, though, because the artists in the room spend the time working–drawing commissions, sketching things for kids, and even completing original pieces they can turn around and sell.

As a writer, I can’t work in that setting. I have to close out this world and live in my own…not something that’s conducive to conversation. So at this last convention–Comic Book City Con in Greensboro–I took Janet’s advice. I brought my sketchbook and some supplies and practiced drawing things while I was at the table.

What I didn’t realize was that THIS WOULD CONFUSE PEOPLE TO NO END. 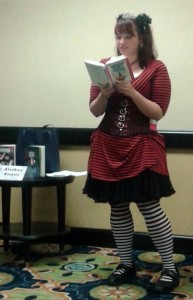 I was sitting at a table drawing, which told congoers I was an artist…despite the fact that my “tools” consisted of Sharpies, crayons, a Millennium Falcon pencil sharpener & a Bunnicula eraser. My table was also covered in books…so they assumed I illustrated all those books. But then why were there two novels on the end? Did I draw in those too somehow?

The most fun was when Joe was also at the table and people thought that HE was the artist and I was just the Booth Babe, hopping around in my Wonderlandish stripes, painted face, and pigtails.

I understand the confusion. I wish I could make it easier for people. I wish I could walk around with a sign that said “Picture Book Writing Costume Wearing Bestselling Author Princess Who Believes in Magic and Sometimes Likes to Draw“…but that might get pretty heavy after a while.

In my world, Neil Gaiman has always been popular enough to be known simply as  “Neil Gaiman,” without having to wear a sign…but I wonder if he ever went through the same sort of labeling problem I’m having. Someday, perhaps I’ll be known simply as “Alethea Kontis” and people will just understand what that means.

Thing is…there are girls already starting to paint their faces like mine and post them on Instagram. This makes me so happy I want to cry. Neil Gaiman–intentionally or not–introduced me to a valid life choice, and in turn I’m introducing it to the next generation of Outside-The-Box girls.

Is there a word for this unique phenomenon of authors turning into characters from their own books? It would be nice to sit down with Neil someday and talk about all this. We could chat about that, and comic scripts, and Alice in Wonderland, and Diana Wynne Jones…because he’s a fan too.  Of course.

Giant hugs to all my fellow outcasts out there and a penny for Guy Fawkes…an outcast if there ever was one.

10 thoughts on “What Do You Do With a Drawing Princess?”