Raise your hand if you’re a fan of Jude Deveraux.

I am a HUGE fan of Miss Jude, having fallen in love with A Knight in Shining Armor when my mother brought it home in a bag of books she’d bought for me from the local Friends of the Library book sale when I was in my teens. (Those book sales saved my life, and if I could be a member of every Friends of the Library branch in the world, I would…but that’s another story.)

Right now, Jude Deveraux is making a rare appearance at the Romantic Times convention in Kansas City this weekend. Lamentably I am not at RT right now–because I am doing 4 conventions and multiple events across the US in the next 6 weeks and my stamina and wallet couldn’t take it–but I really wish I could be.

Happily, in this day and age of social media, I enjoy staying in touch with Miss Jude via her Facebook Fan Page, to which she posts regularly, usually daily, and usually very early in the morning. She posts a lot about what she’s working on, what changes her editor has asked her to make, what side projects she loves working on…it’s so awesome for me as a writer AND a fan to see all this go through her head.

One of the more recent projects has her writing about a girl who is treated very badly by her family, and she’s asked a lot of us if we’d had similar experiences and what our reactions were. At the end of several weeks’ discussion, she’s decided to make the horrible mother and sister step-relatives, more because of the rules of some inheritance plot she’s including than the stereotype of The Evil Stepfamily. 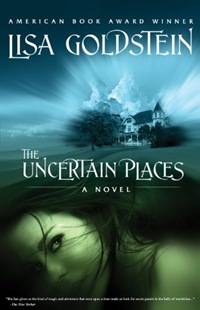 As a student of fairy tales, the whole stepfamily dynamic (and its reputation) has always fascinated me. There’s a GORGEOUS fiction book by Lisa Goldstein called The Uncertain Places (if you’re a fan of Grimm — the TV show or the tales, you must check this out). In the book, Goldstein mentions that the Grimm Brothers wrote about Evil Stepmothers so much because no one would believe that mothers could treat their biological children so cruelly.

I can’t find the academia to back this up (and if you happen to know, that would be awesome), but it makes sense to me. Some truths are just too far beyond the suspension of disbelief a reader allows when opening the cover of a book.

YA author (and fabulous curmudgeon) Richard Peck mentioned this once in a talk he did about a historical novel he was writing, and a French girl he had interviewed for authenticity. Essentially, he could not include all of her story, because no one would have believed it.

From this perspective I can see the fascination of true crime novels (I’m looking at you, Avery Mermaid), because the author is expected to shock the reader with events that are, indeed, stranger than fiction.

It seems a shame that in this world, there are things a fiction writer can’t include in her writing because “no one would believe it.”

Have you ever come across something in a book you just couldn’t believe?

Or have you had something happen to you that you know you could never write about…because no one would believe it?

9 thoughts on “Stranger Than Fiction”